‘Spies’ recruited by SSA got salaries without contracts, Zondo hears

Unidentified witness testifies that bags of money used by State Security Agency to pay for security at ANC rally. 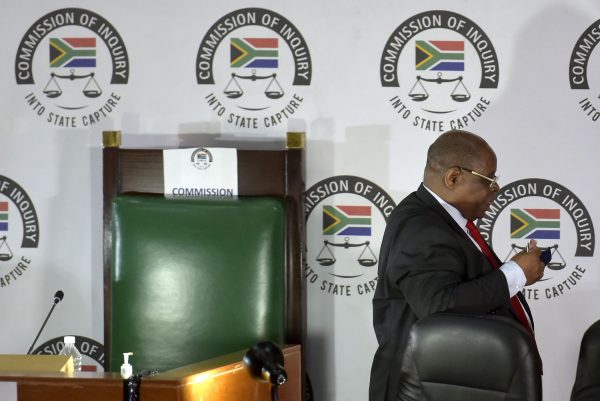 An anonymous witness, only referred to as “Dorothy”, provided testimony in camera against those implicated in corruption and political abuses at the State Security Agency (SSA) before the Commission of Inquiry into Allegations of State Capture on Friday.

During the proceedings chaired by Deputy Chief Justice Raymond Zondo, Dorothy dished out details about how SSA money was used to paid for security at ANC rallies, among other things.

She told the commission that former president Jacob Zuma’s “top spy” Thulani Dlomo recruited two groups of individuals, who received salaries paid by the SSA without being formally employed by the agency.

“Two groups of individuals whom we refer to as co-workers were recruited, trained and utilised by SSA. The first group was recruited by Mr Dlomo when he was then the general manager of special operations. The second group was recruited by him after his appointment as the DDG [deputy director-general] upon his request for curriculum vitae of potential recruits. These to my knowledge were contracts between them and SSA,” she said.

Dorothy said the groups were instructed by Dlomo to recruit uMkhonto we Sizwe Military Veterans Association (MKMVA) veterans to be stationed at an ANC rally held at the Royal Bafokeng stadium in Rustenburg, North West in January 2016.

The R1 million budget, Dorothy said, was partly paid to the veterans and also used to cover expenses such as transport and accommodation.

When asked by evidence leader Paul Pretorius why the veterans, who were not trained, were deployed to the ANC rally and why the party was not in charge of its own security, Dorothy said: “Chair, Mr Thulani Dlomo would be the best person to answer this question.”

The R1 million was withdrawn and personally given to the MKMVA by Dorothy, the commission heard.

Pretorius said there was another R1.8 million withdrawn in September 2016 meant to deal with #OccupyLuthuliHouse. Dorothy said the money was used to cover a stipend, transport and pay the MKMVA veterans who were stationed at the ANC’s headquarters, Luthuli House, in Johannesburg.

“I worked with the ANC head of security [on the operation]. Mr Dlomo instructed  me to make a requisition and pay for all the expenses related to the operation,” she said.

The hashtag was created by people who wanted to occupy Luthuli House on the day Zuma and then deputy president Cyril Ramaphosa were holding a meeting.

Dorothy said she gave former state security minister David Mahlobo a R1.5 million bag of cash at his residence in Cape Town in February 2017. However, she did not know what the money was used for.

“I was deployed to Cape Town for the Sona [State of the Nation Address] event. During my deployment I was instructed by Mr [Arthur] Fraser to receive a bag of money from one employee of the SSA and to take it to Minister Mahlobo. I met the SSA employee and collected the bag of money as instructed from him [Fraser]. I then handed the money to Minister Mahlobo personally at his official residence [but] I cannot recall if he signed for it or not,” she said.

She said she did not know if the money was used for Sona activities or whether the bag had R1,5 million in it, saying that she relied on the instruction she was given that she had to deliver the said amount to Mahlobo.

Watch the live proceedings, courtesy of SABC News, below: