Says the protection of these will ensure that there is never another state capture in South Africa. 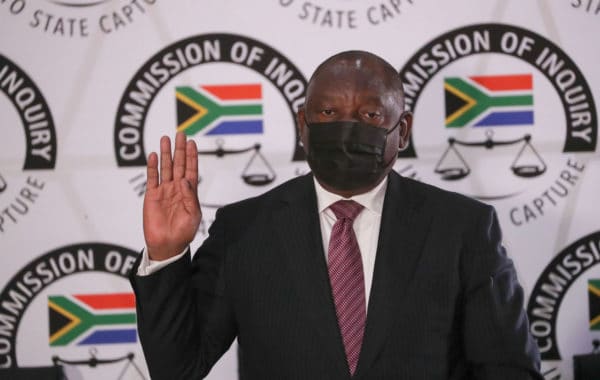 South African President Cyril Ramaphosa appears on behalf of the ruling party African National Congress (ANC) at the Zondo Commission of Inquiry in Johannesburg, South Africa, 11 August 2021. The Zondo Commission was set up by former President Jacob Zuma to investigate state capture and corruption in the country. EPA-EFE/SUMAYZ HISHAM / POOL

Whistle-blowers, judiciary and active citizenship are the greatest weapons South Africa has in the fight against the abuse of power and the theft of public resources, said President Cyril Ramaphosa in his closing remarks as the last witness before the Commission of Inquiry into Allegations of State Capture on Thursday.

Ramaphosa appeared before the commission in the last two days and gave his testimony on a number of issues pertaining to his time as the deputy president and president of the state, his involvement in government business and the influence he may have had.

In his closing remarks, Ramaphosa asked for the protection of the said three things to ensure that there is never another state capture commission in South Africa.

“We need to give whistle-blowers better protection, both in law and in practice. Without whistle-blowers, we will not be able to tackle corruption effectively,” said Ramaphosa.

“We need to entrench the new approach to the funding of political parties. We need to protect the judiciary from interference and ensure that the courts continue to be accessible to all South Africans.”

“Above all, we need to celebrate and encourage active citizenship, for that is our greatest defence against the abuse of power and the theft of public resources.”

Ramaphosa said that his testimony sought to indicate his personal knowledge of the events under investigation, the decisions he took, and the considerations that informed those decisions.

He said that as a person who occupied a position of authority during the state capture era, he takes full responsibility for the choices that he made and the actions he took.

“I will not run away from those decisions.”

“I have also sought to outline some of the measures this administration has taken to end state capture and to put in place corrective measures,” explained Ramaphosa.

“The progress that has been made over the last two-and-a-half years should, I hope, stand as testament to my own commitment and the commitment of the administration I lead to deal decisively with corruption and state capture.”

Among other things, Ramaphosa said that the government needed to reinforce the checks and balances within a democratic dispensation that are meant to prevent the abuse of power.

“We must strengthen the institutions established to support democracy, and effectively capacitate our law enforcement agencies. We need to safeguard the freedom, independence and diversity of our media.”