Weather continues to wreck havoc with all racers as seventh stage needs to be shortened due to abnormal rainfall. 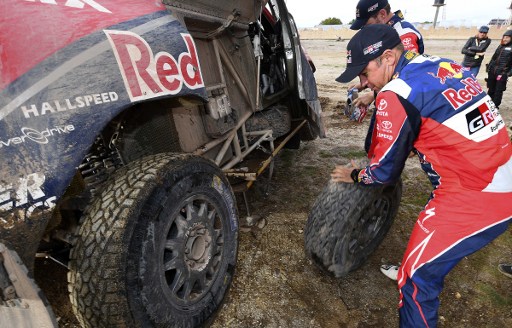 Giniel de Villiers had to work on his car during Monday's stage. Photo: Franck Fife/AFP.

With stage six having been cancelled due to poor weather conditions, and Sunday reserved as an official rest day, the race took another knock on Monday when the timed section on the marathon seventh stage was reduced from 322km to 161km due to flooding on the route.

The South African was over an hour behind overall leader Peterhansel (Peugeot) in the general rankings, though he remained in contention with five stages left.

“We lose between 30 and 40 percent engine power thanks to the 3 600m average altitude at which we raced today, so we are very happy to be so close to the times set by the turbo-charged cars ahead of us,” De Villiers said.

Co-driver Rob Howie, the only other South African in the car division, was 11th on the stage with Zimbabwean Conrad Rautenbach, and they were lying 14th in the standings.

In the bike category, the last remaining SA rider in the race continued to hold on near the back of the field.

Joey Evans was 105th on the stage, and was 102nd in the rankings, more than 13 hours behind fellow KTM rider Sam Sunderland of Great Britain, who held the overall lead.

Tuesday’s eighth stage will see the race move from Bolivia to Argentina with a 892km leg from Uyuni to Salta, including a 492km timed section.