South Africa's Olympic champ pipped to the post by F1's Nico Rosberg but local charity Waves for Change gets recognised. 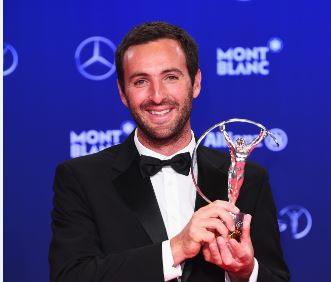 While Bloemfontein rocket Wayde van Niekerk may have been overlooked in the Breakthrough of the Year category, a Western Cape community surfing project carried the SA flag at the Laureus World Sport Awards in Monaco on Tuesday evening.

The Waves for Change programme, which offers social care and emotional support for vulnerable young adults growing up in violent areas, got the nod for the Sport for Good accolade, scooping the nation’s eighth award at the prestigious annual ceremony in the last 16 years.

Meanwhile, Formula One world champion Nico Rosberg of Germany was given the Breakthrough of the Year award ahead of Van Niekerk and four other nominees.

Rosberg raced to his first world title in his 11th and final top-flight season, announcing his retirement at the end of the campaign at the age of 31.

Other nominees in the breakthrough category were Almaz Ayana of Ethiopia, who smashed the 23-year-old women’s world 10 000m record when she clocked 29:17.45 to win gold in Rio, World Sevens Series champions Fiji, who earned victory at the inaugural Olympic rugby sevens tournament, football outfit Leicester City, who lifted the English Premier League crown for the first time after being promoted two years earlier, and the Iceland national football squad, who reached the quarter-finals in their maiden appearance at the European Championship.

Hacking 0.15 off Michael Johnson’s 400m world record with his 43.03 effort from lane eight, Van Niekerk delivered a sterling performance at the Rio Olympic Games to became the first South African athlete to better a global mark on the track since readmission.

He also cracked the sub-10 second barrier early least year to establish his place as the most versatile speedster on the global circuit, following on from his first sub-20 and sub-44 performances in the 200m and 400m sprints the previous season.

Award winners in other categories at the Laureus gala included Jamaican speedster Usain Bolt, named Sportsman of the Year for the fourth time after raking in another three Olympic gold medals.

19-year-old American gymnast Simone Biles was recognised as Sportswoman of the Year for her four Olympic golds.