South Africa's athletics seasons kicks off on Tuesday in Durban and a certain Anaso Jobodwana has a big point to prove. 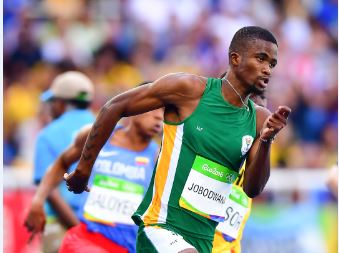 Anaso Jobodwana ran with an injury in the Rio Olympics and did himself more harm than good. But now he's back, fit and ready. Photo: Roger Sedres/Gallo Images.

The elite South African track and field season will get under way with the ASA Speed Series meeting in Durban on Tuesday evening.

With some of the country’s top athletes hoping to build early momentum, we look at three individuals to watch at Kings Park Stadium.

After a disastrous 2016 season, Jobodwana will have his first real chance to bounce back on home soil.

The US-based athlete was struck down by injury last year, and in his only appearance of the campaign he was eliminated in the heats at the Rio Olympics.

Having set a national record of 19.87 for the 200m bronze medal at the 2015 World Championships, he will be eager to start his comeback campaign in style.

He lines up as the firm favourite in the men’s 100m race.

Having enjoyed a breakthrough 2016 season, Gelant will hope to pick up where he left off with a solid start to the new campaign.

He shattered the SA 5 000m record last year, clocking 13:04.88, before earning the silver medal at the African Championships and reaching the final at the Rio Olympics.

He will turn out over the longer 10 000m distance at the season opener.

With Athletics SA concentrating on distance races in Durban, in order to provide rare opportunities on the track at sea level, marathon runner Irvette van Zyl will drop down in distance to compete in the women’s 5 000m contest.

Unbeaten in domestic competitions last year, she is hoping to keep her options open for the World Championships in London in August, and Van Zyl should dominate the race in an effort to prove she still has the speed to perform on the track.