To play KG or not play KG? That’s the Proteas question

South Africa wants to go for the kill against New Zealand in the ODI series but team management admit Kagiso Rabada needs to be managed. 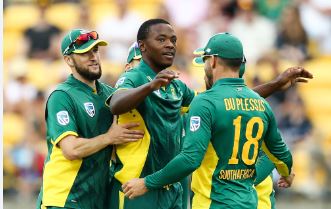 Proteas coach Russell Domingo is faced with a selection poser ahead of tomorrow’s fourth one-day international against New Zealand in Hamilton.

The Proteas lead 2-1 and need to win just one of the remaining two fixtures to clinch the series.

Domingo is tempted to unleash Kagiso Rabada on the Kiwis yet again in order to go for the kill at Seddon Park despite being cautious of managing the workload of South Africa’s top-ranked ODI bowler in a taxing season.

Rabada took 2/31 in the Proteas’ four-wicket win the opening match in Hamilton, was rested during the six-wicket loss in Christchurch then starred with 2/39 in the third match in Wellington.

”Its a fine line between resting players and trying to win series,” Domingo said.

”You have to manage that process quite carefully. Particularly for someone like KG.

”I read somewhere that he bowled 200 overs more than anybody else last year … and to think he’s only 21. Andile Phehlukwayo is only 20. So those are two young bowlers who need a lot of management.

”It’s hard to leave KG out of the next game in Hamilton and it’s no coincidence that when he’s back in the mix we look a different side. I need to speak to the sports scientists a little bit more over the next couple of days, but we need to manage that carefully.”

Domingo is expecting a backlash from the Black Caps after their convincing 159-win in Christchurch on Saturday.

The Kiwis have strengthened their squad with fit-again opener Martin Guptill and veteran spinner Jeetan Patel for the last two matches.

”They haven’t lost a series here stretching back for about eight series and I think and we’ve got two tight games to go. We know they’re a side that always bounces back and we can’t get ahead of ourselves,” Domingo said.