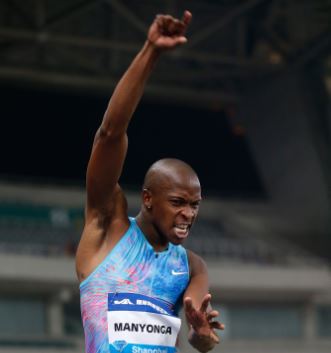 The Olympic silver medallist opened his series with a massive 8.60m leap and closed it out with a slightly further attempt of 8.62m, just three centimetres short of his own SA mark, to take a comfortable win.

Countryman Ruswahl Samaai also delivered a fine effort, launching a best leap of 8.34m, while Zarck Visser continued to battle in his return from injury woes, ending sixth with a jump of 7.88m.

Less than two months before the World Championships in London, in-form athletes Manyonga and Samaai occupied the top eight places in the global rankings.

Antonio Alkana, who set a national record 13.11 in Prague earlier in the week, scorched to victory in the men’s 110m hurdles contest.

Running into a 1.4m/s headwind, Alkana completed the race in 13.47, holding off Frenchman Aurel Manga by 0.02, with the first five men crossing the line within 0.10 of the South African in a blanket finish.

Sprinter Anaso Jobodwana took second place in the men’s 200m race in a season’s best 20.62, with British athlete Daniel Talbot securing victory in 20.36, and compatriot Carina Horn grabbed third spot in the women’s 100m dash in 11.35, as Dutch star Dafne Schippers delighted the crowd with a home win in 11.09.