The silver medalist in the 10km at the World Championships galloped to a fine win at the CitySurfRun as SA's Stephen Mokoka finishes 4th. 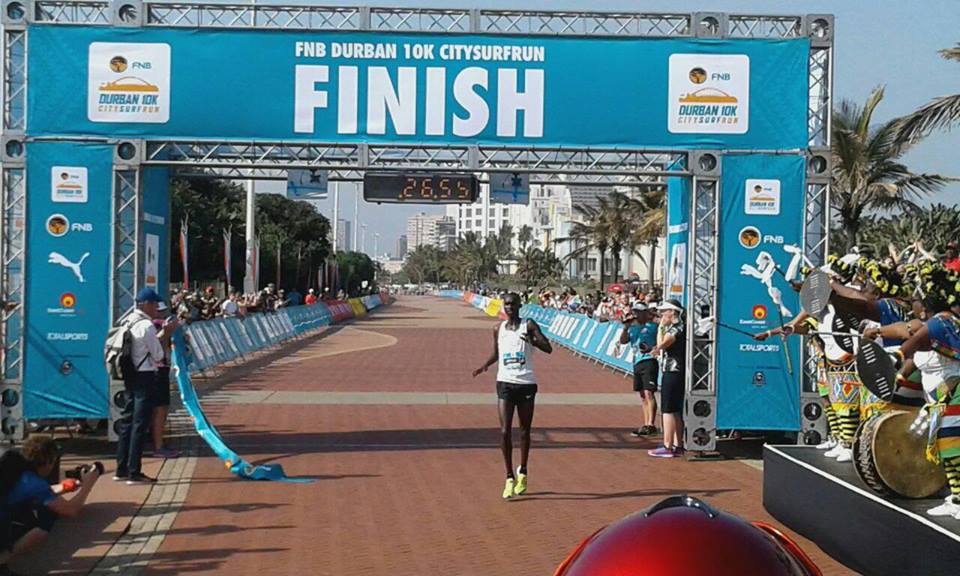 Ugandan athlete Joshua Cheptegei ripped apart a world-class field in Durban on Sunday, storming home in 27:28 at the FNB CitySurfRun road race to clock the fastest 10km time ever run on African soil.

While ’26:55′ flashed up on the electronic timing device at the finish, indicating he had run the second fastest time in history, race referees later confirmed his official time was more than half a minute slower.

Nonetheless, Cheptegei broke the Ugandan national record and clipped 28 seconds off the SA all-comers’ best of 27:55, which had been set by Kenyan athlete Andrew Limo in Port Elizabeth in 2004.

“I came here to run fast, and I was watching the clock, so I pushed in the second half,” said Cheptegei, the World Championships 10 000m silver medallist.

Fellow Ugandan athlete Stephen Kissa took second place in 28:04, after losing touch with his countryman in the second half, and Switzerland’s Julien Wanders finished third in 28:12.

In the women’s race 19-year-old Mercyline Chelangat also shattered the Ugandan national record to win in 31:37, completing the race 10 seconds ahead of Kenyan Paskalia Chepkorir.

Meanwhile, on a busy day for SA road running, Irvette van Zyl won the sixth and final leg of the Spar Women’s Grand Prix series in Joburg in 35:08.

Former track specialist Kesa Molotsane finished second in 35:27 to secure the series title after a dominant maiden season on the road.

In Cape Town, David Manja won the Gun Run Half-Marathon in 1:04:36, after he was sent the wrong way and the results were adjusted, and Jenna Challenor took the women’s race in 1:17:40.

National cross country champion Precious Mashele charged to victory in the men’s 10km race in 28:51 and Zintle Xiniwe was triumphant in the women’s contest in 35:49.