In a distinctly low-key campaign for local athletes at the World Indoor Champs, the long jump world champ at least takes silver. 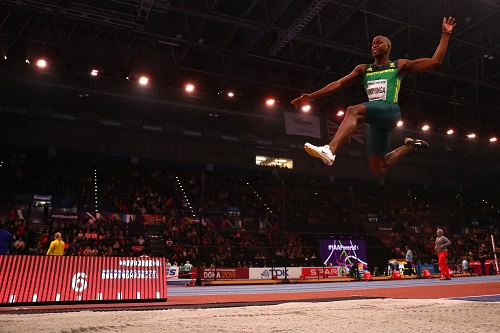 Luvo Manyonga of South Africa competes in the Long Jump Mens Final during the IAAF World Indoor Championships on Day Two at Arena Birmingham on March 2, 2018 in Birmingham, England. (Photo by Michael Steele/Getty Images for IAAF)

South Africa’s campaign ended in both a whimper and a bang on Friday night, with some disappointment and a moment of celebration at the World Indoor Championships in Birmingham.

Outdoor world champion Luvo Manyonga, the last member of the small SA contingent left standing before the lights went out, delivered a superb performance in the men’s long jump final, though he ultimately settled for silver.

While he launched an African record of 8.44m in the fourth round, it was not enough to beat Cuban athlete Juan Miguel Echevarria, who went two centimetres further.

“This is my first ever world indoors, and only my third ever indoor event, so it means a lot to me,” Manyonga told the IAAF website.

Sprinter Carina Horn missed out on a spot in the 60m final by 0.01, clocking 7.18 to finish third in her semifinal.

Distance runner Dom Scott-Efurd took ninth position in the 3 000m final on Thursday in 8:59.93 and was fourth in her 1 500m heat on Friday, with no place for her in the medal contest over the shorter distance.

With 60m hurdler Antonio Alkana being withdrawn from the start lists, apparently due to visa issues, the SA team’s campaign came to a close midway through the four-day championships.