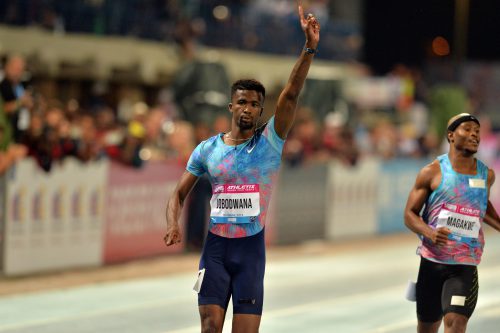 Building further momentum after regaining his best form in the early stages of the year, Jobodwana outclassed a quality field over the rarely run 150m distance which included 100m world champion Justin Gatlin of the United States.

The lanky South African stopped the clock at 15.08, with an ecstatic Roscoe Engel grabbing second place in 15.17. Gatlin, who was still in the pre-season phase of his preparation for the international campaign, settled for fourth position in 15.23.

“I know he’s not at his best, but it’s Justin Gatlin. He’s the world champion and not a lot of people have been able to beat him,” Jobodwana said.

“Mentally, it was important for me going into Commonwealth Games just to feel comfortable in a race and know that I can finish strong, and win.”

Semenya, meanwhile, stormed to victory in the women’s 1 000m contest in 2:35.43, ripping nearly two seconds off the oldest record in the South African books. The previous mark of 2:37.20, held by Ilze Wicksell, had stood for 35 years and 29 days.

Though she lost touch with runaway pace setter Wenda Nel on the first lap, Semenya managed to pick it up in the second half of the race, cruising to a comfortable win.

“I just had to listen to the splits and feel it,” Semenya said.

“I was a little bit out and I had to come back, but it’s fantastic.”

In other disciplines, Akani Simbine opened his season with an impressive win in the men’s 100m race, clocking 10.05.

Ruswahl Samaai took the men’s long jump with a leap of 8.24m, sailing beyond the eight-metre mark with five of his attempts, and former world champion Nicholas Bett of Kenya won the men’s 400m hurdles in 48.88, dragging six men under the 50-second barrier.