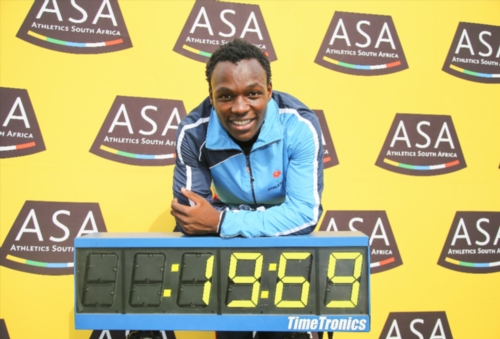 Spectators were offered another thrilling day of action on Friday’s second day of the SA Athletics Championships in Pretoria.

Sprinter Clarence Munyai stole the show, but some great performances were again dished out across the board.

Delivering one of the most spectacular track performances ever witnessed on SA soil, 20-year-old Munyai stormed across the line in his semifinal in 19.69 seconds. He ripped 0.15 off Wayde van Niekerk’s national record and climbed to 10th place in the all-time world rankings, just 0.01 outside the African record held be retired Namibian legend Frank Fredericks. He was set to compete again in the final on Saturday night.

Hitting the front from the gun in her first-round heat, Semenya opened a massive gap and coasted home in 1:58.92, achieving one of her fastest times on SA soil, despite the high altitude of the capital city. If there were any doubts about her carrying the ‘favourite’ tag into Saturday’s final, she wasted no time in putting them to bed.

Though he did not have much competition, in the absence of injured Jaco Engelbrecht, Orazio Cremona made a point after being given the runaround by officials for a place in the national team to the Commonwealth Games. He produced a heave of 20.71m, proving he deserved his place in the squad for the Gold Coast showpiece by securing his seventh national title.

Expanding on his incredible longevity, veteran Chris Harmse’s hammer landed at 70.62m, as he clinched his 23rd successive national title. Despite putting up a fight in an attempt to dethrone the long-standing champion, Tshepang Makhethe could not get past 69.01m, and he settled for second place. Aftwerwards, 44-year-old Harmse confirmed he would return to defend his title again next year.

Racing just a few minutes apart, the sprinters again had the crowd on their feet, despite the cooler conditions offering slower times than those recorded in the semifinals the day before. Former champion Simon Magakwe reclaimed the men’s title in 10.07 and Carina Horn charged to victory in the women’s contest in 11.08.