Luvo Manyonga leads the way with another record-breaking performance as Sunette Viljoen continues her remarkable consistency in major events with a fine bronze in the Commonwealth Games. 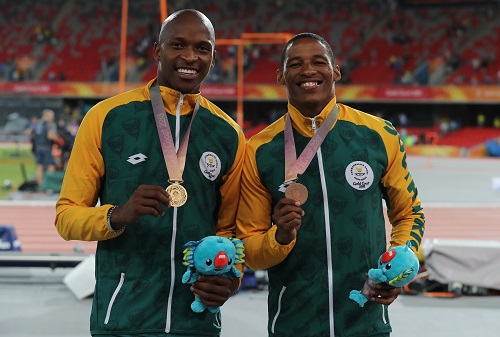 Luvo Manyonga and Ruswahl Samaai of South Africa of South Africa during the Medal Ceremony of the Men's Long Jump Final on day 7 of the Gold Coast 2018 Commonwealth Games at Carrara Stadium Track on April 11, 2018 in Gold Coast, Australia. (Photo by Roger Sedres/Gallo Images)

Making further headway on Wednesday, the national team earned five medals, climbing past New Zealand into fourth place in the overall standings on day seven of the Commonwealth Games in Gold Coast, Australia.

With field event specialists sticking up their hands in the athletics competition, world champion Luvo Manyonga spearheaded a podium double in the men’s long jump alongside compatriot Ruswahl Samaai.

Manyonga took the lead from Australian silver medallist Henry Frayne with a leap of 8.35m in the fourth round, and he went even further with his last attempt, setting a Games record of 8.41m. Samaai earned bronze with his 8.22m effort in round two.

“This was very important to me,” Manyonga said.

“It was my first Commonwealth Games and I got gold with the Games record. It was on my bucket list of major competitions… and there are still more to tick.”

Delivering once again, ever-consistent javelin thrower Sunette Viljoen bounced back from an injury hiatus to step on the podium at her fourth successive edition of the quadrennial Games.

She was lying second until Australian athlete Kelsey-Lee Roberts launched a 63.89m effort in the final round. Another Australian, Kathryn Mitchell, took gold with a massive 68.92m throw.

“I only had one competition before the Commonwealth Games. I couldn’t have done any more technically, and I prepared to the best of my ability with what my body was capable of, so I’m so happy to walk away with my bronze. Very proud,” Viljoen said.

There was disappointment, meanwhile, for sprinter Anaso Jobodwana who was scratched from Thursday’s 200m final.

Jobodwana was too quick out the blocks in his semifinal, and though he was shown a green card and finished second in 20.61 to reach the medal decider, he was later disqualified.

While the SA badminton team lost six other matches in the round of 32, Michelle Butlet-Emmett and Elsie de Villiers kept their hopes alive, handing Zoe Morris and Cheryl March of Falkland Islands a 2-0 defeat to book their place in the round of 16 on Thursday.

The Proteas netball team thumped lowly ranked Barbados 85-25 in their last match of the group stages, setting up a playoff against Malawi on Thursday for fifth position.

And the national men’s hockey side beat Canada 2-0 for a consolation victory, though they settled for last spot in their group.

They were set to face Wales in the wooden spoon playoff for ninth place on Friday.