Firm favourites for the series crown, the Proteas faced no real trouble in their win over a lowly ranked Namibian side. 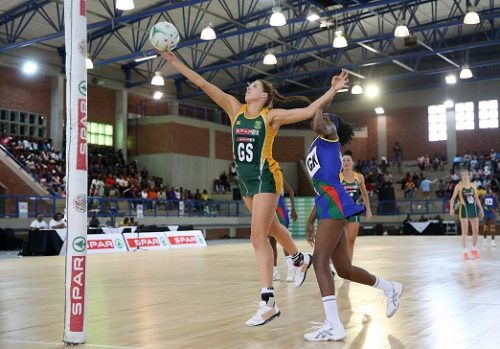 Sigrid Burger of South Africa in action against Namibia during day 1 of the Netball Diamond Challenge at the Ngoaka Ramatlhodi Indoor Sports Centre on November 27, 2018 in Polokwane, South Africa. (Photo by Reg Caldecott/Gallo Images)

South Africa got off to a superb start at the Diamond Challenge netball series on Tuesday, with the Proteas coasting to a commanding victory over Namibia and the SA Presidents XII edging out Zambia in their opening matches in Polokwane.

Firm favourites for the series crown, the Proteas faced no real trouble in their 78-28 win over a lowly ranked Namibian side.

Taking early control, the hosts led 17-6 at the end of the first quarter, and they strengthened their grip on the game in the second stanza, extending their advantage to 38-9 at the half-time break.

Unable to gain any real traction, the Namibians continued to struggle in the third quarter and trailed 61-15 heading into the final period.

Namibia managed to put up a fight in the last 15 minutes, but the Proteas stretched the gap to 50 points by the final whistle.

“There are quite a few things we still want to work on, but it was just great to step out on court as a team again and get some great passages of play,” said Proteas captain Bongi Msomi.

“It was a good start but obviously we are never satisfied so we’d like to keep getting better from here.”

It was a memorable clash for former captain Maryka Holtzhausen, who competed in her 100th Test for the national team, and goal shooter Lenize Potgieter, who turned out in her 50th match.

“I never thought I would have 100 caps for South Africa, and playing at the same venue where I started is amazing,” Holtzhausen said.

Meanwhile, the SA Presidents XII were locked in a hard-fought battle, with Zambia holding a 38-36 lead going into the final quarter.

Fighting back, the young SA invitation squad managed to secure a narrow 48-46 victory.

Earlier on the opening day of competition at the five-day tournament, Zimbabwe earned a 43-30 win over Botswana.