The controversial duping of the Chiefs two weeks ago had their CEO's handwriting all over it. 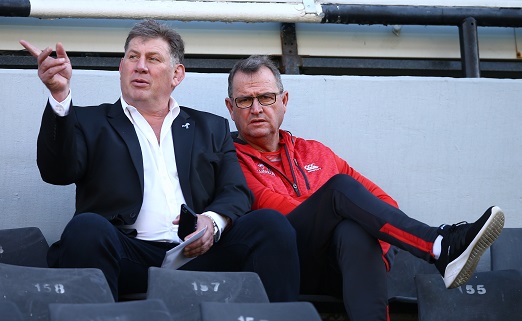 It’s really just seven days of not really hearing anything from your favourite team.

Former Bok coach Heyneke Meyer disliked them because of the adverse effect it had on match fitness.

Heck, the Bulls have lost twice this campaign coming off a bye.

And, as things stand, the Lions’ week-long break will also stroll along quietly … just the way Rudolf Straeuli likes it.

In fact, some noise should be made, not about a campaign of mediocre results, but about something both Straeuli – the Lions’ chief executive – and his interim head coach Cash van Rooyen said.

Two weekends ago, Straeuli almost proudly proclaimed to Netwerk24 that the team had masterminded a sneaky “tactical” victory by sending out a false squad announcement for the match against the Chiefs in Hamilton.

Springboks Malcolm Marx and Elton Jantjies had initially been relegated to the bench, only to emerge in the starting line-up for what turned out to be a 23-17 victory.

“We wanted the Chiefs to believe that they weren’t going to play (one assumes he meant start the game),” Straeuli told the Afrikaans website.

“With Malcolm on the bench, the Chiefs rested some of their key forwards.With him in the starting team we could take them on at scrum time and it worked well. The foundation for our victory was laid up front.”

The irony is that two of the Chiefs’ pre-eminent All Blacks, lock Brodie Retallick and hooker Nathan Harris, weren’t rested because of the Lions’ tactics.

It was All Blacks protocol, so it wouldn’t have mattered anyway.

Then, following a 10-36 defeat to the Crusaders last week, interim coach Ivan van Rooyen patently contradicted his boss in categorically stating that it was never the plan to deceive the opposition.

“That’s definitely not the case,” Van Rooyen said at the post-match presser.

What the Lions did wasn’t illegal.

Sanzaar protocol merely dictates that teams need to announce their match squads 48 hours before a game, which the Lions did.

Yet there’s nothing preventing them from making changes after that.

You can question the sportsmanship of the move, particularly given the pious nature of the Lions brand.

Indeed, this is a franchise that has worked hard and successfully to become one of the most popular brands in Southern Hemisphere rugby.

These type of moves are out of character.

But that’s also not really the point.

The real concern here is why Straeuli is commenting on team selection matters.

He can rightly say he was merely well informed, but that would be a statement that won’t cut much ice with people who are familiar with his history as Springbok coach.

The former loose forward was labelled as paranoid in the second year of his tenure and later obsessed with conducting most of his day-to-day responsibilities in a clandestine nature.

Former Bok media manager Mark Keohane wrote in his book, Springbok Rugby Uncovered, how Straeuli created chaos before 2003’s Tri-Nations Test against the All Blacks at Loftus by purposely changing the week’s schedule – they had just beaten the Wallabies at Newlands – by not flying to Gauteng but Durban instead.

There he kept his fringe Boks on their toes and organised an impromptu “practice” match against a Sharks team to “test combinations”.

That game was scheduled for the Thursday – the players involved were only informed on the Wednesday afternoon.

Needless to say, the media was kept in the dark.

The whole exercise became so farcical that the players weren’t even allowed to know the location of the match and were escorted by a “crack security team” headed by Adriaan Heijns, a former SAPS Task Force Commander.

When the exercise was finished and everyone returned back, Straeuli was apparently delighted that he managed to pull off such a clandestine “operation” and keep the players out of their comfort zones, to keep them alert and adaptable at all times.

That’s the man for you – an eminently efficient operator who likes to be in control and hates distractions.

As Bok coach he made no secret of the fact that he hated the “hanger-ons” – fans, agents, friends and families – that are part and parcel of a national squad and is generally overly cautious when he talks to any media, even instances where he doesn’t even need to be.

Straeuli has done an exceptional job as the Lions’ chief, of that there’s simply no doubt.

But he’s also a man who influences others easily and it’s not difficult to believe that the Lions’ seesawing fortunes in 2019 is making him twitchy.

His tenure has been rosy all the way to date because a winning team doesn’t necessarily create controversy.

Now that his transitional franchise is in choppy waters, it’s likely he’s wary of bad things being around the corner.

I’d venture to say De Bruin’s unfortunate illness, which deprives the team currently of the only truly experienced figure in their coaching staff, only increased Straeuli’s desire to launch some sort of intervention.

He really doesn’t need to.

The Lions were bound to start staring challenges in the face and now he needs to trust the structures he helped put in place.

He should refrain from planting ideas in the heads of his younger coaches and, crucially, at least make sure consistent messages are being conveyed to the media, supporters and stakeholders.

He isn’t a coaching consultant and nor should he become one.

Because when Straeuli becomes hands-on, things become a bit weird.