The favourite for the women's race is predicting fireworks, but defending men's champ Bongmusa Mthembu is typically measured. 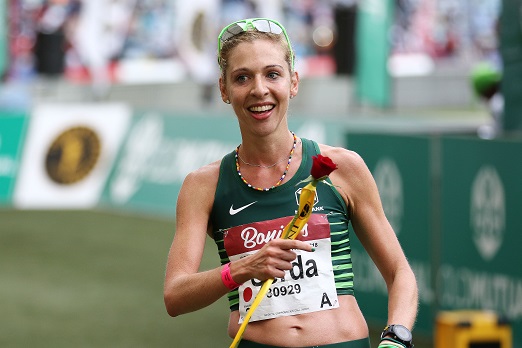 Less than two months after she narrowly missed the record at the Two Oceans ultra-marathon, Gerda Steyn predicts the women’s race will be fast from the start at the Comrades Marathon on Sunday.

Steyn, tipped to break the women’s ‘up’ run record of 6:09:23 held by Russian athlete Elena Nurgalieva, said on Friday that a cracking race was on the cards between Durban and Pietermaritzburg.

ALSO READ: Look out for these stars at the Comrades

“My preparation has gone really well, and after coming off a big high in Cape Town, I was able to really focus and recover,” said Steyn, who spent some time preparing for the race in the French Alps.

“It’s going to be very fast, and I have no doubt the racing will start early on.”

Despite lining up as the favourite, however, Steyn was expected to face a brutal battle against a quality field which also featured defending ‘up’ run champion Camille Herron of the United States and last year’s ‘down’ run winner Ann Ashworth, who confirmed this would be the last ultra-marathon of her career.

Other contenders in a packed line-up included veteran athlete Charne Bosman and local Durban favourite Jenna Challenor, who was making her debut.

Meanwhile, Bongmusa Mthembu was reluctant to commit to fast times, or even a successful title defence, taking a typically cautious approach as he went in search of his fourth Comrades victory and his third in succession.

“I would never stand on the Comrades start line and say I’m going to win,” Mthembu said.

“What I will say, as I’ve always said, is that I will be ready to give it my all.”

Facing a line-up which included ‘down’ run record holder David Gatebe and 100km world record holder Nao Kazami of Japan, Mthembu insisted he would run his own race rather than keying off any opponents.

“Whoever wins, it will be his day, and if I win it will be added to my legacy,” he said.

“I’m not worried about other people. Only myself.”