Van Straaten confident Kings are ready to take next step 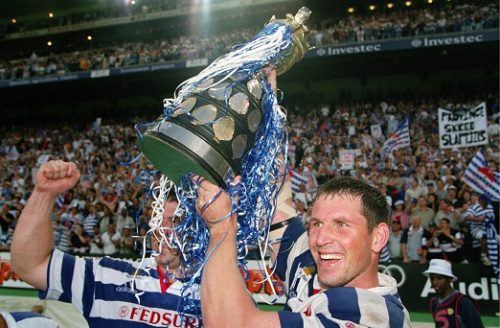 The Southern Kings could be set to surprise people when they return to PRO14 action from a mid-season recess early in the new year.

So says their defence coach, former Springbok flyhalf Braam van Straaten , who, after moving from the Sharks, has been impressed with how quickly the young Kings team have developed and matured.

Although the Eastern Cape team has just one win from seven games played so far, Van Straaten believes the last two games before the break were a watershed and the team is now ready to take the next step.

“I think we have been on a massive growth spurt in the last six weeks, starting with the last two games and then into the four weeks that we have been hard in training for the next phase of the season,” said Van Straaten.

“Winning against the Ospreys, our first win in the PRO14 on overseas soil, was a big moment for us. And then while we didn’t win the following game against Connacht, we felt we acquitted ourselves well against a very good Connacht team. It just feels like suddenly the things we have been working on, the empowerment we have given the players, is paying off.

“We lost a couple of games earlier in the season that we should have won, but perhaps in a way it was a good thing we didn’t get across the line in those games. That might have given us a false sense of security. We needed to be smarter and to work harder and the early results going against us showed us that. In the last six weeks the guys have shown that they have absorbed the lessons and the youngsters are now putting their hands up and taking ownership and responsibility.”

Although there was a slight step back against Connacht, the Kings have made particularly big strides in Van Straaten’s field of expertise, with the poor defensive performance against Glasgow Warriors in a tour game being followed by a match winning defensive effort against the Ospreys.

Van Straaten, who worked in a regimented system under Robert du Preez at the Sharks, has been trusted by Kings head coach Rob Kempson to go with his own ideas and is revelling in the authority he has been granted, something he perhaps didn’t enjoy in Durban.

“Myself and Rob played together so we go back a long way and we know each other well,” said Van Straaten.

“He knows where I am coming from, he knows my work ethic, and he gives me the authority to have my own ideas and to implement them. I cut my teeth in Super Rugby and when I arrived it was clear we had to get a lot better than we were. But the young guys in the team have been receptive and I can honestly say that I’ve seen the same results (in terms of evolution to a good defensive system) in five months here that I had after two years previously.”

Van Straaten believes the Kings’ defence has now developed enough to provide the building block for the necessary development of their attacking game.

And that’s why he believes the Kings could surprise a few people in January.

Perhaps not initially, for their first game back from the break will be in Edinburgh (January 4 in mid-winter, hardly the place to unleash new angles to their attacking game, but certainly once the team comes home and the conditions become drier and the surfaces firmer.

“It is once your defence is top notch that you can start growing your attack, and I think we are now ready to take that step,” he said.

“We’ve now had Swys de Bruin (former Lions coach and Springbok assistant) with us for six weeks, and he’s put in a lot of work with the guys in the past few weeks at training. I really believe we are going to surprise a few people with our game going forward. We’ve worked really hard and it feels like we are going from strength to strength.

“A few individual errors let us down against Connacht, but the win away over Ospreys has given us confidence. During the course of the campaign the confidence and faith in the coaching staff has grown too. An example of an important moment in that regard was the try we scored when fielding a restart against the Ospreys.

“From analysing the opposition defence we got an idea that there might be an opportunity kicking the ball in behind them and it worked perfectly for us. It showed the players what can be gained from analysis. We want them to make decisions, to analyse their opponents.

Rob has a wise head as a coach and while he has a firm hold of the reins, and the discipline has completely changed under his coaching, he also creates a good coaching environment by giving everyone a voice and the freedom to have opinions.

We want the players to be empowered to make decisions and that is an area where there has been tremendous growth.”