Mo'unga scored one of their four tries, converted them all and added five penalties for a match haul of 28 points. 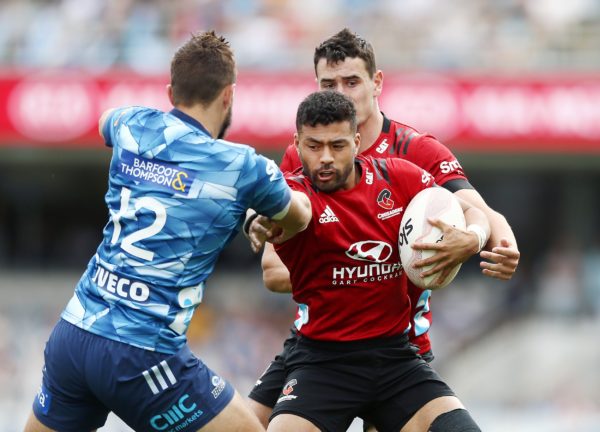 Richie Mo'unga shone for the Crusaders against the Blues. Picture: Getty Images

A scintillating performance from Richie Mo’unga led the Canterbury Crusaders to a 43-27 victory over the Auckland Blues in the clash of the New Zealand titans and cemented their grip on Super Rugby Aotearoa on Sunday.

Both sides went into the match unbeaten and the Blues had hometown advantage, but they could not consistently match the relentless power of the Crusaders pack coupled with Mo’unga’s direction of a more enterprising backline.

In a clash that featured 20 All Blacks, the Blues were still in with a chance at nine points down with seven minutes remaining.

But when Ofa Tu’ungafasi was yellow-carded, the Crusaders cashed in on the one-man advantage and extended the lead with a further try.

In addition to directing the Crusaders attack, Mo’unga scored one of their four tries, converted them all and added five penalties for a match haul of 28 points.

Barrett likened the intense clash to a Test match and it was a relief to get through it.

“Just hanging tough, and turning pressure into points and then holding on for the win. It was a real battle,” he said.

“There was a lot of wrongdoing and against a side like the Crusaders you can’t have that and the scoreboard showed it,” he said.

The first three times the Crusaders entered the Blues 22 they moved the scoreboard with two tries and a penalty.

After an early Otere Black penalty had the Blues 3-0, the Crusaders replied with a try to Jack Goodhue following up a well-weighted grubber kick from Bryn Hall.

The Blues regained the lead with a counter-attack try to Blake Gibson after Crusaders wing Leicester Fainga’anuku dropped a pass when he had an open run to the line.

It was not the only passing error to hinder the Crusaders in the first quarter, but once they settled the visitors had the better of the backline match ups and began to dominate territory.

A second visit close to the Blues line and Mo’unga landed a penalty while their third foray resulted in a try to Codie Taylor from a lineout drive.

The Crusaders continued the momentum into the second half with a Mo’unga penalty, two minutes after the resumption, pushing the lead to 20-7.

But there was still in the Blues who struck back when Tuipulotu favoured a lineout over a penalty shot at goal and it produced a try to Kurt Eklund.

But the pressure on the Blues of constantly defending was starting to show as Mo’unga landed three penalties in quick succession.

In the closing stages, Eklund scored his second try to keep the Blues in touch only for Mo’unga to respond for the Crusaders and when Hoskins Sotutu scored for the Blues, a try to Crusaders’ wing Sevu Reece put the result beyond doubt.