"My last win was in 2014, and now I’m looking forward to a nice season on the Ladies European Tour.” 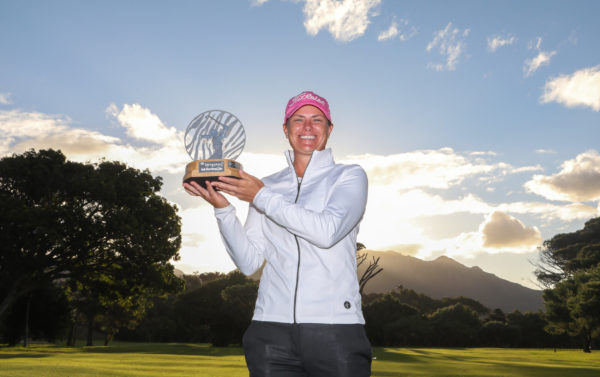 In the end, her challengers stumbled at the final hurdle on Sunday, and Lee-Anne Pace held on to win her fourth national open title when she won the Investec South African Women’s Open Championship title by one stroke at Westlake Golf Club.

She carded a level-par 72 in the final round after a weekend of trying conditions, and that was enough to ward off the threat posed by the young German Leonie Harm, who also made level-par in the final round which left her just short at three-over for the tournament. In a share of third place were another German, Karolin Lampert, and South Africa’s Nicole Garcia on five-over.

“It’s really very special for me,” said Pace of the tournament co-sanctioned by the Sunshine Ladies Tour and the Ladies European Tour. “I lost it a few years ago here on the same course and I’m really happy to have pulled it off. I’m a bit older now and I’m so happy to win again. My last win was in 2014, and now I’m looking forward to a nice season on the Ladies European Tour.”

And while Harm was her nearest challenger in the end, it was the teenager Pia Babnik who would have provided her with her biggest headache as she plotted her way to the championship. Babnik shared the lead with Pace after the third round was completed on Sunday after being suspended for a waterlogged course on Saturday.

The lanky Russian had slipped out of contention, but came storming back with successive birdies on 12 and 13. But impetuosity saw her close double bogey-bogey-double bogey to slip to a share of fifth at six-over.

It was then that Pace made the move which probably sealed the tournament for her. She was short with her approach on the par-four 12th, but she putted from the fringe and saw her 30-footer disappear into the hole. She looked sheepish, but with the rain about to start again, it was a crucial birdie in the run for home.

“I have to say it’s been really hectic with the weather,” said Pace, “and we got to 15 and it started raining again, and I thought, ‘Here we go!’ But we all managed to push through.”

Experience was critical for Pace, for whom this was a 10th Ladies European Tour title. “I hit the ball on the right sides of the holes,” she said. “There were a couple of putts that could easily have dropped, but I hit the greens I had to and gave myself the chances when I could.”

The three players who finished behind Pace had special reason for extra delight in that they all punched their tickets to the 76th US Women’s Open at Olympic Club in San Francisco in June.

Pace was also happy to play her way into the major. “I have to say I really wanted that spot,” she said. “I’ll have to get my visa next week, but I love the US Open. It’s such a challenge.”

For Pace, the victory underlined her dominance of South African women’s golf with a performance in condition and a course that would have satisfied the most hardened US Open purist, and she will take heart from her record-breaking fourth win, pulling her one clear of Mandy Adamson who won in 1995, 1997 and 2002.