Favourites, yes, but it’s how Proteas play that matters – Bavuma

"We want to carry on the same language and feel throughout both formats and fortunately the majority of our players are in both the 50-over and T20 squads.” 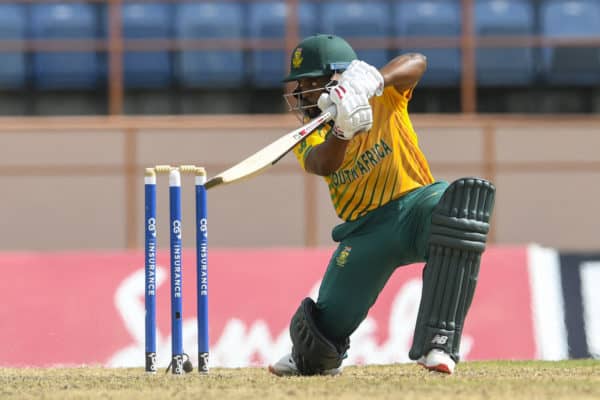 Proteas captain Temba Bavuma is hoping hi steam can kick on from their tour of the Caribbean when they face Ireland in an ODI series from Sunday. Picture: Randy Brooks / AFP

South Africa are currently bottom of the ICC Men’s Cricket World Cup Super League and obviously have a ton of work to do on their ODI game, but the good news is the sands of time are not running out on them because they have until March 2023 to finish in the top seven and qualify for the World Cup later that year.

India, as hosts, qualify automatically for that World Cup, so in all probability the Proteas have to finish in the top eight. They are 13th at the moment with just nine points, while the Netherlands are ninth with 20 points. But if South Africa beat Ireland 3-0, as expected, in the ODI series that starts on Sunday then they will earn 30 points and leap to fifth in the standings.

So for captain Temba Bavuma the focus is more on the short-term goal of continuing the polishing up of their game that started in the West Indies.

“We are chasing results because obviously it’s a priority to start racking up points and qualify for the World Cup, but we know there is a process that we need to master and that’s where our main focus is,” Bavuma said from Dublin on Saturday.

“This series is another chance to really get to terms with how we want to go about playing our cricket. We are seen as favourites, but the focus is not on results but on mastering our process.

“We did fairly well in the West Indies, albeit in T20 cricket, but that does flow into the ODIs. There definitely are similarities between the two formats; our style, philosophy and thinking is the same. We want to carry on the same language and feel throughout both formats and fortunately the majority of our players are in both the 50-over and T20 squads.”

Depending on the weather, conditions could be testing for batsmen and Bavuma said there is the possibility of the Proteas boosting the batting line-up by playing an extra all-rounder instead of one specialist bowler. Which automatically brings Andile Phehlukwayo, a mainstay of 61 ODIs, into the conversation. But the 25-year-old has been terribly inconsistent in the last couple of years.

“Due to the conditions, maybe we’ll bring in an extra all-rounder so we have an extra cushion in the batting line-up,” said Bavuma.

“But we still want the batsmen to take ownership of what they need to do and the bowlers too. It’s not about experimenting but we might try out different options and allow guys to show what they can do.

“I definitely see Andile playing a big part in the team, he’s an integral member of the squad because he’s one of the few who has considerable games and experience behind him. He can’t just be thrown in the wayside, he still plays a massive role, but confidence is such a volatile thing.

“Some days you wake up feeling top of the world, on other days you don’t know what end of the bat to hold.”

Bavuma out of Sri Lanka tour, Maharaj to captain ODI team
2 weeks ago
2 weeks ago

Bavuma out of Sri Lanka tour, Maharaj to captain ODI team
2 weeks ago
2 weeks ago