Springboks boss Rassie Erasmus is also hoping to get a match against the Pretoria-based Bulls franchise in Cape Town on Saturday. 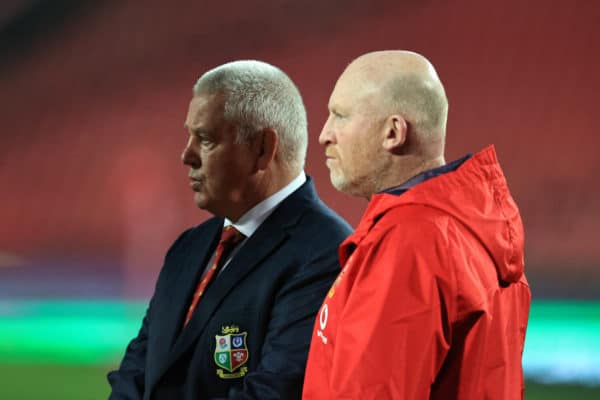 British and Lions attack coach Gregor Townsend has had to resort to virtual coaching as the tourists prepare for the first real challenge on their South African tour.

Townsend stayed behind in quarantine in Johannesburg because of Covid-19 when the Lions moved to Cape Town at the weekend.

The former Scotland flyhalf is only expected to rejoin the squad on Wednesday, too late to play a hands-on role in the build-up to what could be a crunch encounter against a Springbok-laden South Africa A team at Cape Town Stadium the same day.

It will be the fourth match for the Lions after runaway wins over depleted franchises the Lions and the Sharks, who faced the tourists twice.

Kicking coach Neil Jenkins said on Tuesday that Townsend had been communicating by the Zoom conferencing app, adding that his absence had not been a major problem.

He said the other coaches had been able to pass on Townsend’s information to the players in training.

“It’s all of us. Gats (head coach Warren Gatland) leads everything as he always does, (defence coach) Steve (Tandy) and myself and the players.

“We have got some fantastic players here who can lead both on and off the pitch. Everyone’s linking in, everyone’s helping out.”

With the business end of the tour rapidly approaching in the form of the first Test in Cape Town on July 24, Springbok director of rugby Rassie Erasmus is trying to set up a Plan B after his request for a second South Africa A game was rebuffed by Gatland.

The Springboks’ scheduled second Test against Georgia last Friday was called off because of the coronavirus and the players were unable to train last week as they were in Covid-enforced isolation.

With some players still in quarantine, Erasmus is fielding what is arguably his best available team on Wednesday and wanted a chance to get other players into action on Saturday with another ‘A’ game to replace the scheduled Stormers’ fixture against the Lions.

With the two high-profile coaches involved in what some commentators have called “mind games”, Erasmus hopes to get a match against the Pretoria-based Bulls franchise in Cape Town on Saturday.

The Bulls were due to play the Lions in Pretoria last Saturday but had to withdraw because of an outbreak of Covid in the camp.

Cape Town has been lashed by heavy rain in recent days, but Wednesday’s match is expected to be played in clear but cold weather.

After several weeks of sunny winter conditions in Johannesburg, the Lions have been training in wind and rain in Hermanus, a town east of Cape Town.

“It was a bit of the shock to the system — in some ways we had it easy in Johannesburg with the great weather there,” said hooker Ken Owens.

“Now we have wind and rain. It is really testing our skills and execution in tough conditions.”

Salmaan Moerat on his neck injury, his return to play and his Bok chance
11 hours ago
11 hours ago

Salmaan Moerat on his neck injury, his return to play and his Bok chance
11 hours ago
11 hours ago