Gary Player, a multiple Masters champion, caused a stir as an honourary starter at the tournament on Thursday. 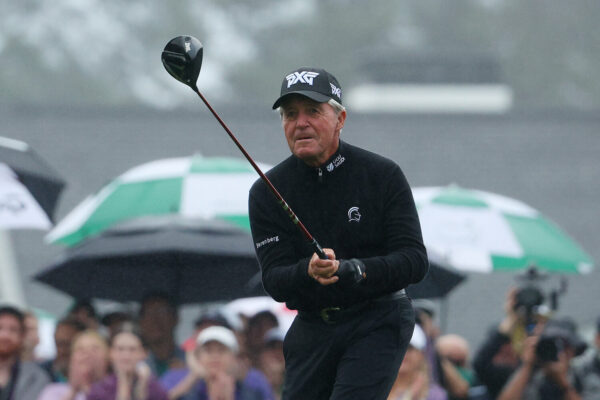 Gary Player of South Africa plays his opening tee shot from the first tee during the opening ceremony prior to the start of the first round of the Masters at Augusta National Golf Club on Thursday. Picture: Andrew Redington/Getty Images

South African golfer Gary Player has become the focus of unwanted attention after appearing at the Masters golf tournament sporting a “Golf Saudi” logo on his shirt.

Player, a multiple Major champion, including three Masters titles, is an honourary starter at the Masters.

On Thursday, ahead of the first round of this year’s tournament at Augusta National in Georgia, USA, Player again took his place alongside fellow greats Jack Nicklaus and Tom Watson to get the 2022 edition underway.

It was, however, the white “Golf Saudi” logo on the collar of Player’s shirt that got many golf fans talking.

The controversial Saudi Arabia golf league intends to rival the current PGA Tour and DP World Tour and is happy to put up huge sums of money to get the world’s best players on board, but has come under attack because of that country’s human rights record, according to Golf Digest.

Former Masters champion Phil Mickelson’s recent comments and association with the Saudi-backed league created a backlash and resulted in the player pulling out of this year’s tournament.

It is not the first time there has been controversy at the start of the Masters.

At last year’s event, when Lee Elder, the first black man to play at Augusta in 1975, was welcomed among the honourary starters, Player’s son Wayne, who was on the tee box alongside Gary and the other players, caused a stir by seemingly using the opportunity to market and promote a line line of golf balls.

The Masters banned Wayne from returning to Augusta, because of so-called ambush-marketing, according to the Daily Mail.

According to Golf Digest Gary Player said the following at the announcement of the Saudi-backed golf league, which is yet to fully get off the ground: “I have long admired the vision of Golf Saudi, but more importantly the work that is being done on the ground to provide access to the sport for all levels.”