It was a horrid day for Tiger Woods though as he carded a 78 in a round that lasted over six hours. 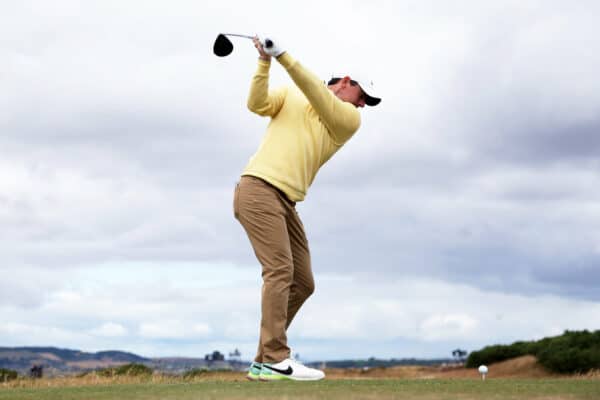 Rory McIlroy of Northern Ireland tees off on the 6th hole during Day One of The 150th Open at St Andrews Old Course on Thursday. Picture: Warren Little/Getty Images

Cameron Young seized the lead in the first round of the 150th British Open at St Andrews on Thursday after an outstanding eight-under-par 64, while Rory McIlroy sits two strokes back but Tiger Woods endured a woeful afternoon on his return to the Old Course.

Woods was determined to feature this week as he continues his recovery from severe leg injuries suffered in a car crash last year, but he toiled for a six-over-par 78 in a grim round that dragged on over six hours.

In contrast Young, the 25-year-old American who first played St Andrews with his parents aged 13, produced a flawless round featuring no bogeys and eight birdies after teeing off in one of the first groups at 8:25 am.

Young, ranked 32nd in the world, finished tied third in this year’s PGA Championship and has now put himself in a strong position to be a contender into the weekend.

ALSO READ: Not much Majors gold left for Oosthuizen as Open starts

“I think any time you’re around the lead in a major championship or any PGA Tour event, frankly, you get more and more comfortable every time,” said Young, who will tee off in his second round at lunchtime on Friday.

The pressure may largely be on closest challenger McIlroy, whose six-under-par 66 included three straight birdies between the fifth and seventh holes.

McIlroy was the favourite for the Claret Jug coming into the week and the Northern Irishman, who won the Open in 2014, lived up to his billing in the opening round.

His dropped just one shot at the par-four 13th and his score matched that in the opening round on his way to victory at Hoylake eight years ago.

“I need to go out tomorrow and back up what I just did today. I think that’s important to do,” said the 33-year-old, who like Young will not tee off until the afternoon on Friday when forecast morning showers are expected to have passed.

“This golf course isn’t going to change that much, I don’t think, between today and tomorrow in terms of conditions,” he added.

Australia’s Cameron Smith sat in third place after an opening 67 along with Scotland’s Robert Dinwiddie who finished his round in near-darkness.

A clutch of players were at four-under including world number one Scottie Scheffler of the United States.

Woods, twice an Open champion at St Andrews, never properly recovered from a disastrous start as he sent his approach to the first green into the Swilcan Burn and ended up with a double-bogey six.

In all he had two double-bogeys and five bogeys, with three birdies preventing a terrible round from being even worse.

He is now almost certain to miss the cut.

“Looks like I’m going to have to shoot 66 tomorrow to have a chance” of making the weekend,” Woods said.

Slow play scarred the day on a course whose tight, criss-crossing layout led to frequent hold-ups, and light was fading badly with the final groups still finishing their rounds.

“It’s just a joke, isn’t it? Like six hours 10, this just shouldn’t be happening ever in golf,” said US Open champion Matt Fitzpatrick, who partnered Woods.

The landmark staging of the world’s oldest golf tournament has not been able to escape the controversy caused by the breakaway Saudi-backed LIV tour.

LIV and the rebels who joined the series were the target of stinging criticism in the build-up, most notably from Woods and Martin Slumbers, the chief executive of Open organisers the R&A.

England’s Ian Poulter, one of 24 players in this week’s line-up who have joined the LIV series, was then booed on the first tee as he went out early on Thursday.

He went on to shoot a 69 and insisted he did not hear any jeers.

“I actually thought I had a great reception on the first tee, to be honest. All I heard was clapping,” said Poulter.

Westwood and Johnson both enjoyed opening rounds of 68.

Players in St Andrews this week are competing to succeed Collin Morikawa, who won last year at Royal St George’s and started with a level-par 72 on Thursday.

The course is hosting the championship for the 30th time, and the Open is expecting record attendances for the week of 290,000.