Stand-in skipper Quinton de Kock isn't too worried about a distinctly average performance with the ball in the 4th ODI against Sri Lanka. 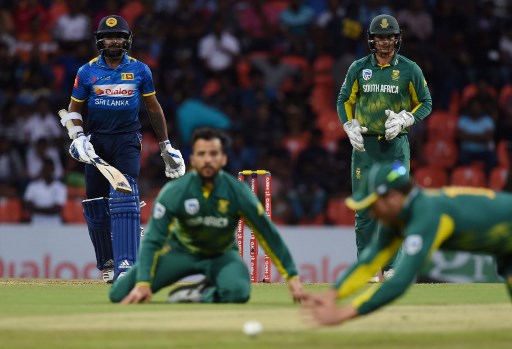 In the end, only a 34-year-old part-time off-spinner conceded less than a run a ball for the Proteas in Wednesday’s four-run loss to Sri Lanka in Kandy.

That was the grim reality for stand-in skipper Quinton de Kock as his inexperienced attack got smashed to all parts.

The new ball pair of Lungi Ngidi and Junior Dala – who made his debut – both conceded over eight an over while 20-year-old Wiaan Mulder leaked 51 runs off his six overs.

Furthermore, Andile Phehlukwayo and the left-arm spin of Keshav Maharaj went for over seven per over.

It made JP Duminy’s spell of 2/35 look positively glittering as Sri Lanka galloped to 306/7 in just 39 overs due to rain.

But De Kock isn’t overly concerned, especially given the fact that the series is already won, the pitch was remarkably batting-friendly and the front-line bowlers boasted 41 caps between them.

That’s an average of just over eight ODIs per bowler.

“I think it was a great experience for them,” said De Kock.

“It’s really good for young guys to be part of a game of this nature. To be honest, I feel they can only learn and grow from a match like this. Only good things can come out the pressure they were put under.”

The inclement weather meant the Proteas were given a far more “generous” target of 191 off 21 overs after the final interruption, especially after De Kock and Amla scored 21 off the first two overs.

That they eventually fell short wasn’t down to the steepness of the equation.

“We actually thought that target was par. We knew it was a good batting wicket that was only getting better,” said De Kock.

“I did get the feeling that we lost wickets unnecessarily a couple of times but the Sri Lankans bowled really well. You can’t take that away from them, they kept applying pressure and taking wickets. You needed to be clever bowling second on a wicket like that.”

It was in stark contrast to South Africa’s efforts with the ball.