The left-hander takes advantage of a let-off to help his franchise beat their bonus point target against the NMB Giants. 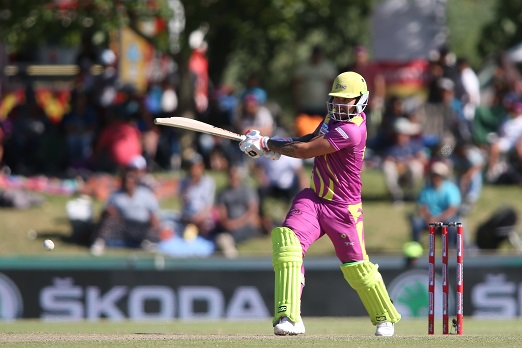 Cameron Delport of the Paarl Rocks pulls a delivery to the boundary during the Mzansi Super League match between Paarl Rocks and Nelson Mandela Bay Giants at Eurolux Boland Park on December 12, 2018 in Paarl, South Africa. (Photo by Shaun Roy/Gallo Images)

Cameron Delport sensationally guided the Paarl Rocks to the bonus point victory they required to advance to the Mzansi Super League playoff against the Nelson Mandela Bay Giants in Paarl on Wednesday.

Tasked with chasing down 130 within 16 overs to leapfrog their opponents into third place on the log, the former Dolphins left-hander – who’s taken up a Kolpak contract with English county Leicestershire – smashed a magnificent 84 off just 45 balls, monopolising the scoring in the process.

But the bowlers also deserved credit for keeping it tight against a Giants batting order that, on paper at least, boasted big-hitting power.

Instead, the canny Dwayne Bravo led the way with a fine spell of 3/22 as the visitors never got going.

The result also means that the Tshwane Spartans, who play the Durban Heat on Wednesday night in Centurion, can’t reach the eliminator anymore.

The Rocks will face the Jozi Stars at the Wanderers on Friday to determine a fellow finalist with the Cape Town Blitz on Sunday.

The true genius of Delport’s knock was how brilliantly he adapted.

He’s not really known for building innings, yet, after weathering the early storm, gave an exhibition of calculated hitting on a surface that wasn’t always easy to bat on.

Seven fours and five sixes came off his blade.

Had Chris Morris not climbed into him a bit in his last over, Bravo’s figures would’ve been even more impressive.

Delport started the over with a six off Jon-Jon Smuts’ left-arm spin, but seemed to have tried his luck one time too many in being dropped the very next delivery.

Undaunted, the 29-year-old launched another six in an over that cost 20 runs.

He simply exploded after that.