The Proteas' opponents on Sunday, Pakistan, were actually their first opponents in the Pink ODI back in 2013. And one of their legends flourished. 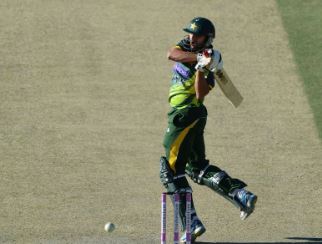 Before AB de Villiers stunned world cricket with his world record 31-ball century against the West Indies in 2015, the inaugural Pink ODI in 2013 had its first brush of magic from a fan favourite.

Pakistan’s Shahid ‘Boom Boom’ Afridi will always go down in cricket folklore as one the most mercurial performers ever.

He held the record eclipsed by De Villiers, a brutal 37-ball effort made on ODI debut when he was just 16.

But Afridi was also a hugely frustrating batsman, a man who didn’t always employ sound judgement as evidenced by final batting average of 23.

One his day though, he was hugely watchable, smashing a magnificent 88 off just 48 balls, a knock that included seven sixes.

Facing a daunting target of 344, Afridi came in with his side in seemingly dire straits at 132/5.

Clearly sensing he had nothing to lose, ‘Boom Boom’ started rattling off six after six.

What seemed like a little bit of fun, started to become problematic for the Proteas as the target crept closer and Afridi in imperious form.

On 73, he dragged a delivery from the wily Ryan McLaren onto his stumps, but the bowler had overstepped and offered him a second life.

Off the resulting free hit, Afridi hit one of the biggest sixes ever seen at the Wanderers, a stupendous effort that sailed over the Memorial stand of the ground.

A few more hits followed before he was out tamely to a Lonwabo Tsotsobe full toss.

Yet the entertainment was royal as South Africa only won by 34 runs in the end.