Miller saves Proteas from yet another choke

The experienced left-hander proves his worth on two fronts, but SA will wonder how on earth they took the first T20 against Sri Lanka to a Super Over. 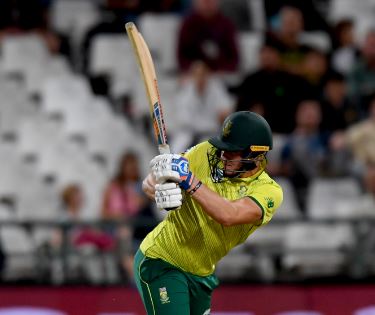 David Miller will probably now want a wicketkeeping gig more often after he starred in that role – as well with the bat – in the Proteas’ nervy Super Over victory over Sri Lanka in the first T20 at Newlands on Tuesday night.

South Africa had managed to throw away what seemed a comfortable victory, self-destructing from 118/3 to 134/8 to merely manage a tie.

But Miller stepped up his game, hitting 13 of the 14 runs the Proteas scored in their six-ball shootout before the wily Imran Tahir only conceded five.

It was hard on the Sri Lankans, who fought every step of the way, but it also really shouldn’t have come down to that.

The 29-year-old was handed the gloves for the game despite Quinton de Kock’s presence in a move designed to test his credentials as the potential backup keeper at this year’s World Cup.

He certainly did those no harm.

Miller was in the thick of things as early as the second ball of the match when he held a regulation catch from a Niroshan Dickwella drive off Dale Steyn.

Later on, he read an Imran Tahir googly perfectly to have Kamindu Mendis, who was the islanders’ batting mainstay with 41 off 29, stumped.

It proved to be a crucial moment as South Africa struck twice in five balls to cripple Sri Lanka’s batting effort.

Andile Phehlukwayo the pick of the bowlers with excellent figures of 3/25.

In fact, that haul would’ve looked even better had he not been hit for two fours off his last two deliveries.

Miller’s biggest contribution though was with the bat.

Coming in at 52/3, he showed his intent by dispatching leggie Jeffrey Vandersay for four off the first delivery he faced.

Yet it was the sublime 20 runs he took off Isuru Udana’s second over that put South Africa in the driving seat.

He also combined well with the composed Rassie van der Dussen (34 off 30) in a record fourth-wicket stand of 66.

Miller’s run out though did spark the Proteas’ implosion, who were far too overeager to finish the game quickly.

Lasith Malinga’s brilliant spell of 2/11 had strangled the lower order and the islanders could’ve won had Dickwella not missed three open stumps when Dale Steyn ran the bye that ensured a tie.