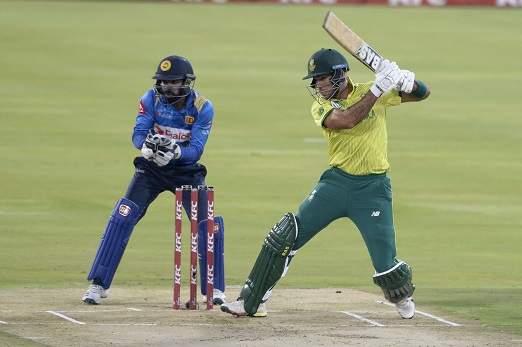 Reeza Hendricks of the Proteas during the 2nd KFC T20 International match between South Africa and Sri Lanka at SuperSport Park on March 22, 2019 in Pretoria, South Africa. (Photo by Lee Warren/Gallo Images)

The Proteas might’ve secured an early T20 series victory over Sri Lanka in Centurion on Friday night, but it was difficult not to take the bigger picture into consideration.

Even though a few regulars such as Quinton de Kock, Faf du Plessis and Imran Tahir are missing for the remainder of the series, the national selectors will still use it to determine the credentials of certain others for the upcoming World Cup.

And that’s where this 16-run win proved very useful.

South Africa’s charge to 180/3 – after being put in to bat – was built around a magnificent, record-breaking second wicket stand of 116 between Reeza Hendricks and Rassie van der Dussen.

Hendricks, under pressure after a poor ODI series where he only averaged 10, improved his chances of a call-up to the showpiece tournament in England by striking a classy 65 off just 46 deliveries.

At the other end, Van der Dussen all but secured his ticket to England with a splendid 44-ball 64, an innings that showcased a different side of his game.

The Highveld Lions stalwart focused on taking on the bowlers and eventually hit three leg-side sixes to remind all that he can vary his batting.

Van der Dussen certainly knows his game and that’s no bad thing at the World Cup.

Stand-in skipper JP Duminy also played his part with a sprightly, unbeaten 33 off 17.

The Proteas’ bowling was generally good, with Chris Morris – who remains an outside bet for England – impressing with figures of 3/34.

Dale Steyn (2/34) set up Sri Lanka’s batting woes with two scalps in the first over, but it was the left-arm spin of Tabraiz Shamsi that stood out.

He was simply outstanding, mixing control with potency in claiming 2/16 in his four overs.

Tailender Isuru Udana once again proved to be a thorn in the flesh, striking intelligently to finish with a spectacular unbeaten 84 off 48, a knock that featured six sixes.

If only the specialist batters could follow his example.