“It’s a new challenge not opening the batting, obviously I have not done it much." 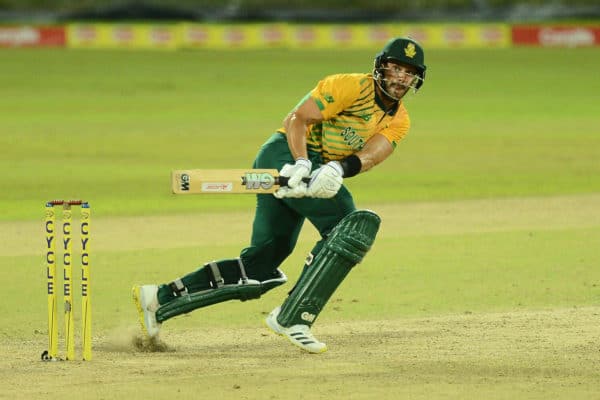 Aiden Markram of the Proteas says he has had to learn to adapt to conditions on the sub-continent. Picture: Isuru Sameera/Gallo Images

Chasing boundaries and trying to get to 200 on a subcontinent turner can be as tempting as the allure of a huskey-voiced temptress, but it can be disastrous and Proteas batsman Aiden Markram says these are the lessons he has had to learn as he adapts to a new role in T20 cricket.

With South Africa enjoying so many top-order options – Quinton de Kock, Temba Bavuma, Reeza Hendricks and Janneman Malan are all in the mix to open – Markram has slipped down a bit into the middle-order. Particularly on the subcontinent, that can be the toughest place to bat, but the 26-year-old seems to be learning when to be patient and when to go for it, judging by his well-paced 48 off 33 balls that took the Proteas to a winning total of 163-5 in the first T20 in Colombo on Friday night.

“It’s quite tough to judge what a winning total will be sometimes, and I haven’t been in that situation too often. You have to trust the information you get from the sidelines, Quinton de Kock usually gives a rough ball-park figure and I was able to chat with David Miller, who is very experienced. We thought 160 was good, slightly above par in those conditions, but we still had to bowl well,” Markaram said after the Proteas’ win on Friday.

“It’s a new challenge not opening the batting, obviously I have not done it much. But I’m enjoying it and it requires you to be street-smart in how you approach your innings.

“I’m used to being up front where your game-plan is fixed, set in stone. But you can’t be like that at No 3 or 4, your approach has to be flexible and it changes from game-to-game.”

The Proteas cross swords again with Sri Lanka at the same venue on Sunday and stand-in captain Keshav Maharaj wants the same intensity to ensure his team wrap up the series at the first opportunity. They will then be able to go into next month’s T20 World Cup in good form having won eight of their last 10 matches. The home side will be angered by their defeat and will come out firing.

“It’s really important for us to show intensity and energy. We understand what’s at stake and we want to be as clinical as possible,” Maharaj said.

“We need to stick to the basics and repeat what was good from the previous game. In terms of our preparation for the T20 World Cup, we must make sure we take care of the series by winning the next game, knowing that Sri Lanka will bounce back.

“I’m a very open-minded captain, but I do demand a lot of energy and intensity. That’s the best way to bring out your character and the best things in your game. Body language is also important because it conveys a message to the opposition.

“The batting is starting to get better with Quinny and Reeza Hendricks setting a foundation and Aiden and David were sublime at the end. The bowlers set the tone in the powerplay – to only concede 34 runs is almost unheard of on the subcontinent – and then they were superb in finishing the game off.”