The South African team will be up against stiff opposition including former tournament winners West Indies, England and Australia. 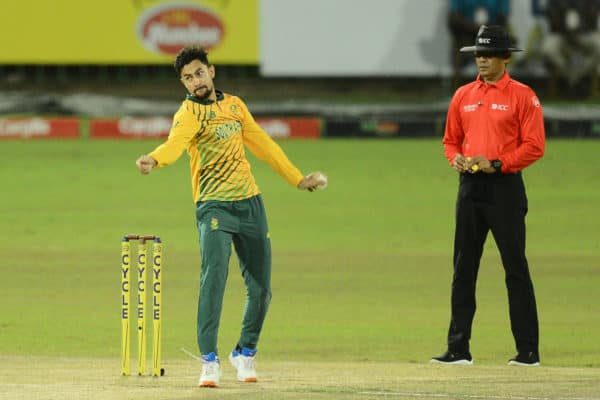 Bjorn Fortuin of the Proteas is excited about testing himself against the best in the world at the T20 World Cup. Picture: Isuru Sameera/Gallo Images/Getty Images

Central Gauteng Lions spinner Bjorn Fortuin is relishing the opportunity of fronting the Proteas bowling attack at the 2021 T20 World Cup in the United Arab Emirates and Oman, starting later this month.

It will be Fortuin’s first appearance at a major ICC event after he was included in the Proteas 15-man squad for the tournament and he will be aiming to impress on the cricket world’s biggest stage.

“There is obviously nerves first time going to a massive event like the World Cup, you always aspire to test yourself against the best players in the world and that’s what I’m excited to do,” admitted Fortuin.

“Obviously it’s new for a lot of us going to an ICC event and to represent our country there but we are up for the challenge, we have prepared well and we are just looking forward to it.”

Fortuin heads to the World Cup in good form having helped the Proteas sweep Sri Lanka 3-0 in their T20I series last month, with him producing solid bowling figures in each of the three matches and he will hope to take that momentum into the tournament.

“It is always nice going into competitions with a bit of confidence, some confidence was provided by that Sri Lanka series and hopefully we can carry that over to the World Cup,” said Fortuin.

“Conditions might be similar which is quite beneficial for us as a bowling unit, so that is something I am looking forward to.”

The Proteas find themselves in a tough group featuring past T20 World Cup winners West Indies, who are the current holders and only two time winners (2016; 2012) and England (2010), along with Australia and two more sides still to be determined from the first round of the tournament.

With just the top two sides from each pool making it through to the competition semi-finals, a stiff challenge awaits Fortuin and the side.

“The goal is to get to the final and try bring the trophy home for our country, that is the first priority and that is something we are aiming for as a collective,” said Fortuin.

“It is a quite a long tournament with some big games involved so we have to take it step by step and sort of prioritise each match as it comes, but we are looking forward to that challenge.

“They are quality teams (West Indies, England and Australia), we have to be wary of their strengths and we have to try capitalise on their weaknesses, and that’s what we are trying to do.

“All three of them are strong teams, I think all three have won the T20 World Cup before but we are going to take it step by step and we know that we have the firepower to beat all of them on our day.”

Fortuin also understands what his role in the Proteas set-up is and what is required of him over the tournament.

“I have to try set the tone for the team up front, that is sort of the role that has been given to me and something I enjoy doing quite a bit and that sets the tone for the rest of the match,” explained Fortuin.

“It is important to get off to a good start and if I can provide that platform for the rest of the guys then I see us getting to the final.”