"We can’t dwell on the anxiety and the negative stuff, we can change people’s lives if we win this World Cup," said the all-rounder. 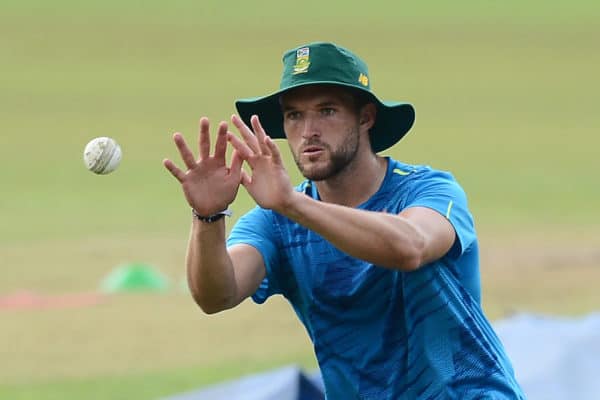 Wiaan Mulder of the Proteas has opened up on the injuries that almost forced him to give up on cricket. Picture: Isuru Sameera Peiris/Gallo Images)

He may be confined to his room in a bio-secure bubble in Abu Dhabi, but Proteas all-rounder Wiaan Mulder says he is filled with gratitude just to be sitting just where he is, because a year ago his entire career was at risk.

The 23-year-old has played just five T20 internationals but made the cut for his first senior World Cup thanks to his batting ability and the way he has contributed vital overs in the attack, showing an air of confidence despite his inexperience in the format.

The highly-rated Mulder has struggled through injuries over the last few years and at one stage was told to give up bowling.

“It’s incredible, a dream come true. Three months ago I didn’t think I would be sitting here,” Mulder said on Friday.

“A year ago I was told I would probably never bowl again and after surgery I didn’t think I would be back in the Proteas set-up for a couple of years. So to be here after all the injuries I’ve had to face is amazing.

“I kept getting back injuries and no-one could diagnose exactly what was wrong. Even during Covid, my body had six months to heal but my back just wouldn’t settle.

“So eventually I went for scans and they showed I have cam impingements in both hips. It means the ball of my femur is too big for the socket cavity and it gets stuck.

“Surgery would have put me out for eight months, but where would it leave my cricket? I was told my career could be over. But physio Craig Govender and Doc Ash (Hashendra Ramjee) have conditioned and looked after me well, and if I manage it I shouldn’t have any issues,” Mulder revealed.

The last World Cup South Africa played in was the 50-over competition in England in 2019, and their performance was abysmal. Their poor record in World Cups in general is well-known, but Mulder said this new-look side has to embrace the pressures.

“We can’t dwell on the anxiety and the negative stuff, we can change people’s lives if we win this World Cup and that’s what motivates us.

“Playing in the U19 World Cup, we did not have the best time and it was the first time I had been exposed to those pressures. But this will be on a level of its own. But we can only embrace it.

“I think T20 is the best format for this Proteas team at the moment, we have such a diverse team and it’s important to just be ourselves, that will be vital in terms of performance.

“We have a nicely balanced side and we beat the world champions in the West Indies and Sri Lanka in Sri Lanka, those were two really tough trips. We’re not favourites, but we have a really good chance, which is a good place to be.”