De Kock has agreed to follow CSA's directive to take a knee in support of Black Lives Matter. 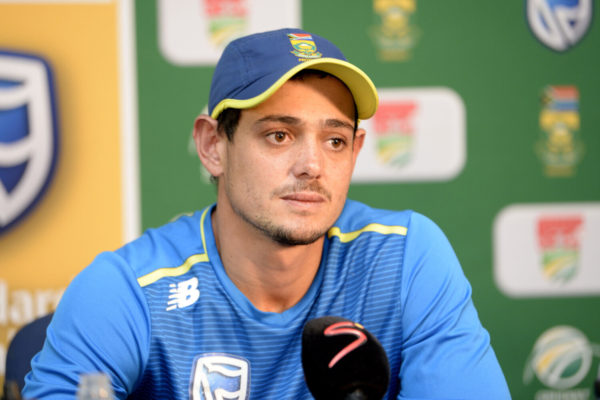 Quinton de Kock will be taking a knee along with the rest of the Proteas team for the remainder of their T20 World Cup campaign in the United Arab Emirates, it was revealed on Thursday.

De Kock’s turnaround came after he issued a statement strongly denying any racist intent in his refusal to take a knee before Tuesday’s match against West Indies, as directed by the Cricket South Africa (CSA) board, and his subsequent withdrawal from the game. The wicketkeeper/batsman said he was deeply hurt by people calling him a racist.

The chairman of the CSA Board, Lawson Naidoo, and two other directors also met virtually with the Proteas on Wednesday night to engage with the players and clarify why they wanted a unified stance on Black Lives Matter from the squad and management.

According to a CSA statement, De Kock then agreed to follow the directive and issued an apology for his actions on Thursday morning.

“We were previously told we had the choice to do what we felt we wanted to do. … I didn’t understand why I had to prove it with a gesture, when I live and learn and love people from all walks of life every day,” said De Kock.

“When you are told what to do, with no discussion, I felt like it takes away the meaning. If I was racist, I could easily have taken the knee and lied, which is wrong and doesn’t build a better society.”

The key batsman was therefore set to be available for South Africa’s match against Sri Lanka on Saturday.

De Kock’s initial defiance was a warning to the new CSA board, however, that reactionary leadership and issuing edicts from upon high without properly consulting the players was only going to cause further divisions.

Even CSA’s apology for the timing of its directive – on the morning of a key match – merely stated that they “regret … that the timing … may have been unsettling for the players”.

The one man who did manage to emerge from this week’s latest BLM crisis with credit, however, was Proteas skipper Temba Bavuma, who De Kock praised in his statement when he said “he is a flipping amazing leader”.