The match has been dominated by the bat, with lots of runs being scored. 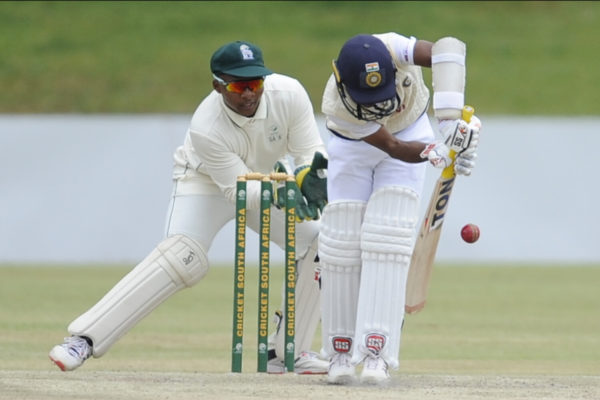 Abhimanyu Easwaran of India A in action against SA A at the Mangaung Oval on Thursday. Picture: Charle Lombard/Gallo Images

The four day game between the South African A team and India A is heading for inevitable draw in the batting dominated match after India reached the close of play on day three 308/4, still trailing the SA first innings by 201 runs.

It will take an improbable feat for the match to end in anything other than a draw, with SA needing to bowl India out twice while also batting in their second innings.

Or India needing to score well over 200 more runs and then bowl out SA cheaply, which is extremely unlikely as just 11 wickets have fallen over the first three days.

This after SA declared their first innings closed on 509/7 in the early afternoon session on day two, before India reached the close on 125/1.

They resumed their innings on day three with captain Priyank Pachal (96) and Abhimanyu Easwaran (103) at the crease and they extended their second wicket stand to 144-runs.

Pachal then, just four short of what would have been a deserved century, was trapped LBW by spinner George Linde on the double nelson, with the score 222/2.

Hanuma Vihari (25) then helped Easwaran add a further 42 runs to the score before he became Linde’s second scalp, caught behind by keeper Sinethemba Qeshile.

Easwaran was then able to reach his hundred before he was caught by Sarel Erwee off the bowling of Lutho Sipamla, with India on 294/4.

Baba Aparajith (19 no) and Upendra Yadav (5 no) then took their side safely to the close without further trouble, meaning day four will most like be a bit of a dead rubber day as the teams play towards a draw.