With the Titans winning in Centurion, the Warriors had to win their game to claim the CSA 4-Day Series title, but they were denied by the weather. 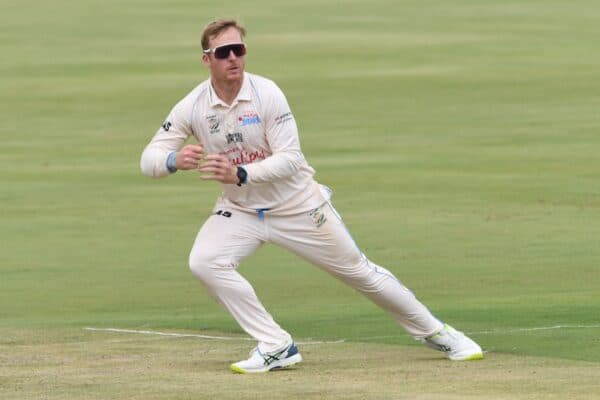 Simon Harmer led the Titans to victory over the Lions, as they secured the CSA 4-Day Series title. Picture: Gallo Images

Despite the Northerns Titans having eventually seen off a determined second innings by the Central Gauteng Lions half-an-hour before tea on the final day, coach Mandla Mashimbyi was not far from having kittens in the changeroom for the next two-and-a-half hours as they waited anxiously for the result of the Eastern Province Warriors match against the Free State Knights in Bloemfontein on Monday.

The Titans eventually bowled the Lions out for 273 in their second innings, Mitchell van Buuren leading the resistance with a tremendously defiant 107, remarkably, his second century of the match. He was ably supported by Reeza Hendricks, who denied Northerns for more than four hours in scoring 89.

But off-spinner Simon Harmer kept chipping away for the Titans and his 6/84 in 33.2 overs took his season tally to 44 wickets at an average of just 19.29.

Northerns were left with just 62 to win and they did that in 13.1 overs with seven wickets in hand.

But Free State were busy collapsing in Bloemfontein, slumping to 82/8 with a lead of just 143, against the EP Warriors, who had declared on their overnight score of 166/3, still 61 runs behind.

With the Titans winning in Centurion, Eastern Province had to win their game to claim the CSA 4-Day Series title.

It was a tactic that very nearly paid off as they bowled superbly in swing-friendly conditions, Mthiwekhaya Nabe leading the way with 4/26 in 12 overs, while Akhona Mnyaka removed Paballo Mogoera (4) and Raynard van Tonder (0) with successive deliveries.

Patrick Botha is being released by the Knights, but the Northerns Titans may be inclined to look kindly on him as his 38 on Monday, following up his first-innings century, was crucial in keeping the Warriors in the field until the rain came shortly before the tea break.

The weather never improved and the umpires finally called off play in Bloemfontein at 5pm, much to the delight of the Titans team in Centurion.

It would seem all is on track with the rebuild at SuperSport Park, the Titans having also finished runners-up in the CSA T20 Challenge last week.

Scores in other games