Van der Dussen went to the most unflustered of centuries, needing just 90 balls to do it, as he pushed himself hard in the sweltering heat 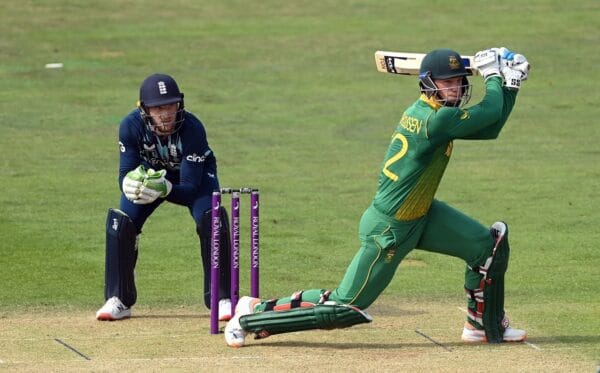 Rassie van der Dussen dishes up a boundary during his dashing century against England in the first ODI. Picture: Stu Forster/Getty Images

Brace yourself Pommies! The Proteas began their tour of England with an emphatic all-round performance as they beat the world champions by 62 runs in the first ODI at Chester-le-Street on Tuesday, a powerful batting display being backed by a dominant performance by the spinners and some skilful, impressive fast bowling.

South Africa had won the toss and elected to bat first in a heatwave that had the ground authorities put precautionary measures in place for spectators and extra drinks breaks allotted for the players.

A sensible start by Janneman Malan and Quinton de Kock (19) saw the Proteas reach 35 in the first six-and-a-half overs, after which Rassie van der Dussen came in and produced one of his greatest innings.

The 33-year-old got going from the outset of his innings, but seemingly without extending himself too greatly as he cruised to his half-century off just 45 balls.

Malan went to a composed half-century himself, but then struggled a bit with his pacing in the middle overs, ending with 57 off 77 balls.

Aiden Markram backed himself and was attacking from the start, but struggled to get the right tempo to his innings as he perhaps went a bit too hard at the ball early on. But as soon as he went back to his natural classy game he flourished, smashing 77 off 61 balls as he and Van der Dussen added 151 for the third wicket off just 123 balls.

Van der Dussen went to the most unflustered of centuries, needing just 90 balls to do it, as he pushed himself hard in the sweltering heat, placing the ball brilliantly, and running hard because he only hit nine fours as he posted a career-best 134 off 117 balls.

Both he and Markram fell in the 46th over bowled by Liam Livingstone, which left new batsmen in David Miller (24* off 14) and Heinrich Klaasen (12) to bat out the last four overs, and they got South Africa to 333/5 when 350 was probably on the cards.

The Proteas might have been a little concerned at the break, but their attack did superbly.

Although England openers Jason Roy (43) and Jonny Bairstow (63) added 102 for the first wicket, they were limited to just 47 in the powerplay as Lungi Ngidi and captain Keshav Maharaj were excellent up front.

South Africa suffered a blow when seamer Andile Phehlukwayo collided with Maharaj in the field and left the field for stitches after bowling just three overs. It meant Markram had to come into the attack but far from leaving the attack deficient, it only strengthened the Proteas’ hand. Markram (4-0-25-2) claimed the key wickets of Bairstow (63) and Ben Stokes (5) in his last ODI, both lbw as they missed sweeps.

But fast bowler Anrich Nortje (8.5-0-53-4) bowled Root and claimed two other wickets in the 45th over to seal the impressive victory as England were bowled out for 271 in the 47th over.

Also read: Boucher upbeat ahead of England ODIs: ‘We’ve got the players and a plan’