While she leaned quite heavily on the support of goal attack Renske Stoltz against Namibia, Mazibuko went on to lead South Africa's attack against Uganda. 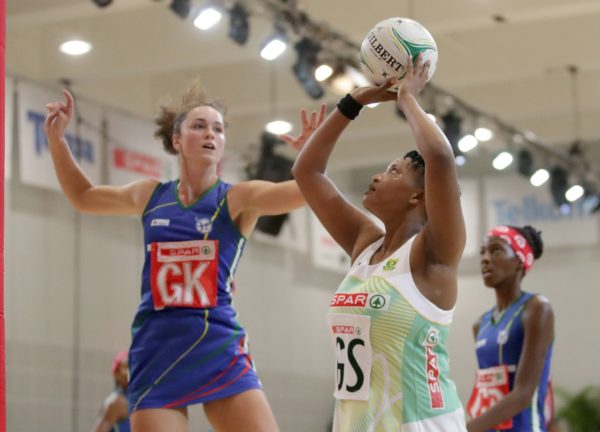 Perhaps next in line as the latest South African netball sensation, goal shooter Nonsikelelo Mazibuko stuck up her hand in style this week by delivering two superb performances for the Proteas, and she says she is eager to emerge as one of the country’s top players.

Not shy of confidence, Mazibuko sank 21 of her 25 attempts at goal in her international debut on Thursday, with the Proteas beating Namibia 58-30 in the opening match of the Spar Challenge Tri-Nations series in Cape Town.

While she leaned quite heavily on the support of goal attack Renske Stoltz against Namibia, however, Mazibuko went on to lead the attack later in the day. Returning to the court for their second match, she dominated up front in a hard-fought clash with Uganda.

Though Uganda held the lead early in the third quarter, the Proteas managed to draw clear in the second half to earn a 49-33 victory, with Mazibuko netting 32 of her 34 attempts.

Mazibuko admitted she had been intimidated by the Ugandan team, who are known for their aggressive physical approach, and the 26-year-old player said it had been difficult to control her nerves.

Time to plan your schedule for the 2021 SPAR Challenge Tri Nations! ????

“It was really tough because I was scared of playing Uganda,” Mazibuko said.

“Coach (Dorette Badenhorst) told us Uganda were really physical, but I decided to take that and throw it in the bin, and I went on the court and performed.”

Elevated to international senior level, Mazibuko hoped to make use of the opportunity in the Tri-Nations campaign, which allowed Badenhorst to experiment against lower ranked teams.

“I didn’t know I would play for the Proteas, but my time is now, so I need to work hard like Lenize (Potgieter, star Proteas forward) and score more goals,” Mazibuko said.

“I want to be the best shooter in South Africa.”