No luck for Team SA on day one of Tokyo Games

The national team will be looking to turn things around on Sunday, with the squad competing in eight sports on day two. 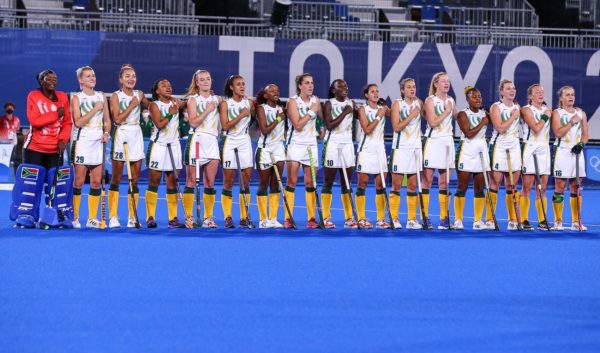 The South African hockey team sing the national anthem ahead of their match against Ireland on Saturday. Picture: Roger Sedres/Gallo Images

The South African team closed out a disappointing first day which they would probably rather forget, as the country’s Olympic charge got off to a tame start in Tokyo on Saturday.

Following sluggish performances all-round in the morning session, on the official first day of competition at the Games, the evening session was equally uninspiring.

In the swimming pool, Erin Gallagher finished eighth in her 100m butterfly heat in 59.69 seconds, missing out on a place in the semifinals.

Michael Houlie also trailed home in eighth place in his 100m breaststroke heat in 1:01.22, and he too failed to progress.

On the hockey pitch, the national men’s team lost 3-1 to Great Britain in their opening match.
Matthew Guise-Brown scored for South Africa in the first quarter and they did well to hold their opponents to 1-1 at half-time, keeping themselves in the game.

The British side found the back of the net in the third and fourth quarters, however, to secure victory.

The SA women’s squad lost 2-0 to Ireland in their opening fixture, conceding goals in the first and third quarters.

Back in the pool, the SA women’s water polo team were on the receiving end of a 29-4 thumping by Spain in their first match of the group stages.

The SA team will be looking to turn things around on Sunday, with the squad competing in eight sports on day two of the Tokyo Games.

Among the expected highlights, cyclist Ashleigh Moolman-Pasio lines up in the women’s road race at 6am (SA time) and swimming sensation Tatjana Schoenmaker is in the 100m breaststroke heats at 12.59pm.