The Blitzboks got off to a good start, beating Ireland in their first match of the rugby sevens tournament. 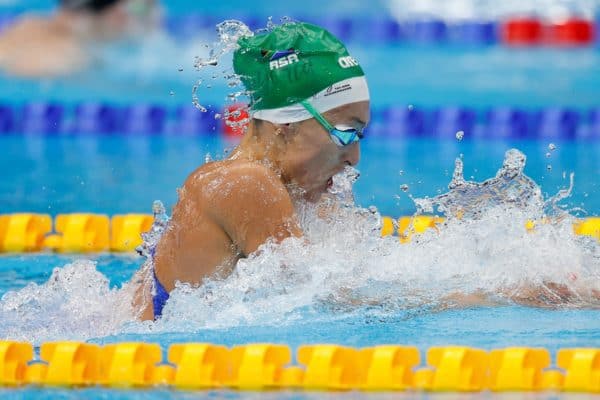 Tatjana Schoenmaker and Bianca Buitendag continued to lead the SA charge on Monday, dominating their events in the morning session at the Tokyo Olympics.

Though she was not as quick as she had been in the heats, when she set an African record of 1:04.88, Schoenmaker cruised to another victory in the women’s 100m breaststroke semifinals.

She stopped the clock at 1:05.07, holding off a challenge from world record holder Lilly King of the United States (1:05.40) who was second fastest.

“I just wanted to get a lane in the final, so we can rest now and be ready for that,” Schoenmaker said.

Schoenmaker will turn out in the final at 4.17am on Tuesday, as she targets the SA team’s first medal of the Games.

Having racked up 13.93 points, to Gilmore’s 10.00, the South African will take a lot of confidence into her quarter-final against Yolanda Hopkins of Portugal on Tuesday morning.

ALSO READ: Le Clos ‘to go for broke’ in hunt for another Olympic medal

Elsewhere in Monday’s morning session, the Blitzboks got off to a good start in the rugby sevens tournament.

Scoring four tries, they beat Ireland 33-14 in their opening match.

The SA squad will face Kenya in their second game later in the day.

Henri Schoeman, the bronze medallist at the 2016 Rio Games, did not finish the men’s triathlon.

Though he was in the mix heading into the run leg, Schoeman pulled out after battling with knee and ankle injuries which had affected his build-up to the race, which was won by Kristian Blummenfelt of Norway in 1:45:04.

Skateboarder Boipelo Awuah did not compete in the women’s street competition, with the 15-year-old athlete reportedly picking up an injury after falling during a training session.