Meanwhile, long jumper Ruswahl Samaai admitted he was gutted after crashing out in the qualifying round of his specialist event. 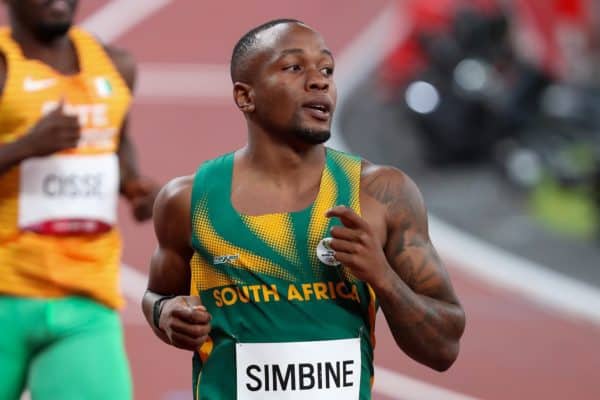 Akani Simbine of South Africa went through to the next round of the 100m at the Tokyo Olympics on Saturday, along with his two South African sprint team-mates. Picture: Roger Sedres/Gallo Images

Making a solid start, all three of South Africa’s 100m sprinters progressed safely through the opening round of the men’s event at the Tokyo Olympics on Saturday.

Akani Simbine, the country’s leading medal contender in the short sprint, won his heat in 10.08, while Gift Leotlela also secured victory in his first-round race in 10.04.

Shaun Maswanganyi was third in his heat in 10.12, joining his compatriots in the semifinals, to be held at 12.15pm (SA time) on Sunday.

Should they make it through the penultimate round, they will turn out in the final at 2.50pm.

“I’m just conserving as much energy as I can because tomorrow is more important,” Simbine said.

“I’m happy I got through, but I didn’t want to burn too much energy and have that sitting in my legs tomorrow.”

Earlier on Saturday, Wenda Nel finished third in her 400m hurdles heat in 56.06, progressing to the semifinals on Monday.

Long jumper Ruswahl Samaai admitted he was gutted after crashing out in the qualifying round of his specialist event.

“I feel like an athlete who wants to announce his retirement today. I don’t know what to say.”

His countryman, Cheswill Johnson, did not register a result from his three attempts and he was also eliminated ahead of the final.

Elsewhere on day eight of the Tokyo Games, Emma Chelius closed out the SA swimming team’s campaign in the pool.

Chelius finished sixth in her 50m freestyle semifinal in 24.64 and did not qualify for the final.

On the golf course, Christiaan Bezuidenhout was lying in a tie for 17th place in the men’s tournament, seven shots off the pace at seven-under par.

Garrick Hugo was in a tie for 46th at one-under going into Sunday’s final round.

The SA women’s hockey team lost 4-3 against India in their last pool match, joining the national men’s side on the sidelines after missing out on a spot in the playoffs.

Back in the pool, the SA men’s water polo squad were handed another crushing defeat, going down 28-5 against Greece.