Business as usual for Blitzboks in Las Vegas

After a slow start, Neil Powell's troops swat their opponents aside to claim an early place in the cup quarterfinals. 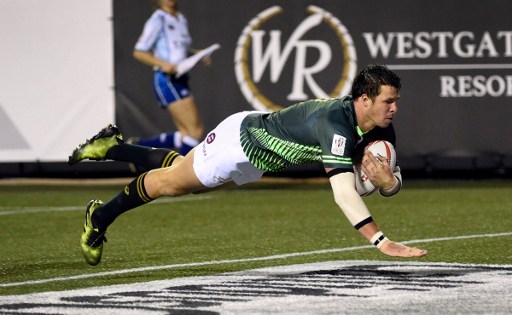 Ruhan Nel dives over after breaking down the Canadian defence in the Blitzboks' first pool game. Photo: David Becker/AFP.

The Blitzboks continued their brilliant form in this season’s World Sevens Series with an unbeaten start to the Las Vegas tournament.

It was pretty plain sailing for Neil Powell’s troop as they’ve already secured their passage to the cup quarterfinals despite still having to play Wales in their final pool game on Sunday.

Justin Geduld was the hero in South Africa’s 31-0 victory over France.

Grabbing his chance to be his side’s main play-maker, he opened the scoring after rounded off a well-worked move.

The 23-year-old scored a second in the dying moments of the first half as the Blitzboks established a comfortable lead.

The French showed a bit more guts after the break but they simply didn’t have the class to trouble the South Africans.

Shakes Soyizwapi and Werner Kok crossed the whitewash as the Blitzboks put a cherry on top of their dominance.

They were far more clinical in this game as a tough first game against Canada seemed to shake them out of a bit of complacency.

For once, South Africa’s watertight defence was exploited by the brute strength of John Moonlight as the Canadians took an unexpected lead early on.

However, that would prove to be the only real headache as the Blitzboks eventually triumphed 26-7.

Ruhan Nel broke a tackle immediately afterwards to calm the nerves before his side took control in the second half.

Geduld’s deft chip was gathered by Rosco Speckman, who claimed the first of two tries.

Branco du Preez had the last say in the match as his try underlined South Africa’s eventual superiority.