WATCH: There’s a loud roar in our Super Rugby XV of the week

The Lions, unsurprisingly, dominate our team of the week. But there are also stars from the struggling sides showing their worth. 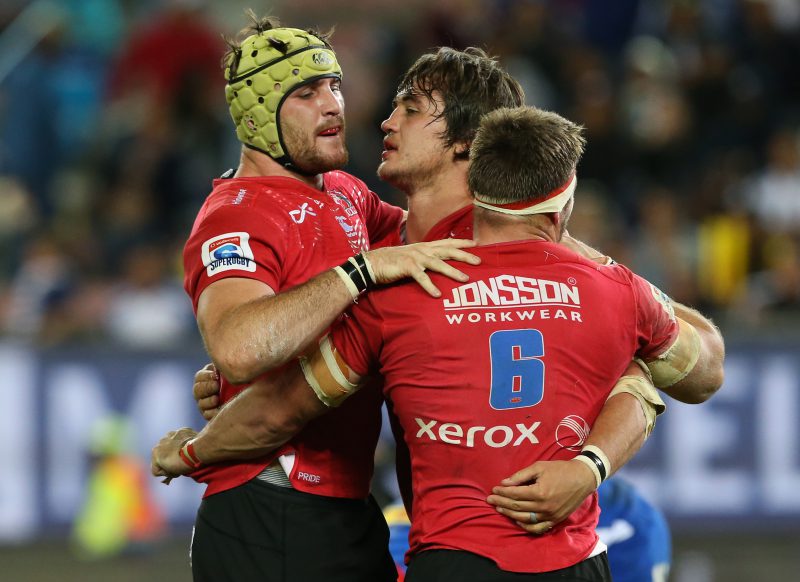 The Lions roared (and mauled) this past weekend. Photo: Carl Fourie/Gallo Images.

It’s starting to sound like a broken record but the Lions really did provide the ultimate highlight of last weekend’s Super Rugby action.

Adaptable, clinical and determined were three words that summed up Johan Ackermann’s troops at Newlands.

And they really do deserve to dominate our team of the week.

Nobody wants to become over-excited when it comes to the Bulls but the exciting Springbok utility back truly did deliver against the Jaguares.

He broke the line three times, ran 113m and even tackled well.

The Boks need this man in form.

The Cheetahs seem to have brought themselves a star in the making from next season onwards.

Mapimpi is lightning quick and as slippery as they come. He won a massive 146m, made 4 clean breaks, beat 5 defenders and finished with two tries.

Brilliant attacking performance against the Reds.

This is a man who leads from the front.

He’s classy and composed but one wonders if playing at a misfiring Cheetahs is really helping him to reach his true potential.

Thrown into the deep end as an early replacement for Rohan Janse van Rensburg, the man from Phalaborwa soared.

He ran beautiful lines – scoring a vital try too – marshalled the midfield well and tackled tightly.

Another man shining in a mediocre team.

Rhule has become one of local rugby’s most accomplished wingers and deserves a Bok look-in again.

He delivered the type of performance worthy of a Springbok flyhalf.

Jantjies isn’t known for being influential when things get tough but at Newlands he was superb.

He kicked his goals, distributed well and, importantly, defended quite well.

Cronje doesn’t get his due.

His game management is outstanding and he’s the best defender at scrumhalf in the whole of South Africa.

There’s no doubt he’s still the Springboks’ first-choice No 8.

Held this head high in a disappointing performance.

The powerful flanker didn’t have much attacking opportunities but defended like a trojan again.

His general calmness as captain is also impressive.

This man is an absolute warrior, regardless of his yellow card.

Some critics felt he disappears in tight games but his showing at Newlands has silenced them.

Another Springbok who desperately needed to show improvement.

He showed good support in rounding off his own try, was solid in the line-outs and tackled like a beast – as 13 tackles attest to.

The core of the Lions’ rampant pack.

He was everywhere on that field, making a stupendous amount of tackles and bullying his opponents.

It says everything that him and lock partner Andries Ferreira outshone the Springbok duo of Eben Etzebeth and Pieter-Steph du Toit.

When you dominate a wily campaigner in JC Janse van Rensburg, you know you’ve done your job.

And brilliantly at that too.

As always, an extra flanker in broken play but Marx isn’t a show pony anymore.

He throws in accurately and scrums superbly.

In other words, he’s now close to the complete modern hooker.

He delivered his best performance of 2017.

In fact, it was his best in some while.