Running the Rhule over the Springboks

The Cheetahs winger knows he needs to show improvement in the Rugby Championship ... just like the national team. 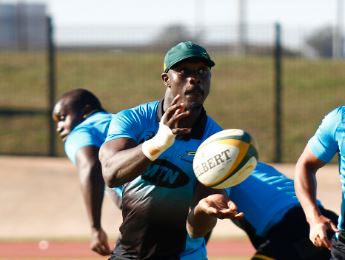 Raymond Rhule is under the spotlight to justify his Springboks place. Photo: Michael Sheehan/Gallo Images.

The Rugby Championship would be the ideal yardstick to measure how much the Springboks have improved since the French series, believes Cheetahs wing Raymond Rhule.

The 24-year-old Rhule, who was born in Accra, Ghana, played in all three Tests in June, but believed they must kick on in the Championship opener next weekend in Port Elizabeth against Argentina.

“I personally can’t wait for the first Test to see where we are after the French Test series,” said Rhule.

“We are trying to get the best out of each other, but we are in a very good space with the team.”

He added the Lions players “brought an immense amount of confidence”, and said they can only feed off working with them and seeing how their minds work.

“There’s a great environment and the Lions have brought that energy along with them,” he said.

“When things are on the up and it’s all positive you can’t really find any issues and the energy they have brought coming out of that final. Most of them are disappointed, but are now looking towards the next challenge.”

Rhule said the All Blacks are not yet on their minds, but they always remain the yardstick.

“We back ourselves, we know it’s a big obstacle, but it’s about putting yourself out there and not be scared about who you are about to face.

“We will never underestimate anybody but rather play the conditions and circumstances. That’s how you can beat them, you just have to back yourself and believe.”

It was confirmed yesterday that lock Eben Etzebeth, who captained the Boks in the absence of the injured Warren Whiteley during the third Test against France, will remain in charge, with flank Siya Kolisi named as his vice-captain.

Courtnall Skosan’s wife gave birth to the couple’s first child on Tuesday and the winger will join the Bok squad later in the week.