Two red cards in two weeks have some people wondering whether the Super Rugby runners-up are starting to cultivate a poor habit. 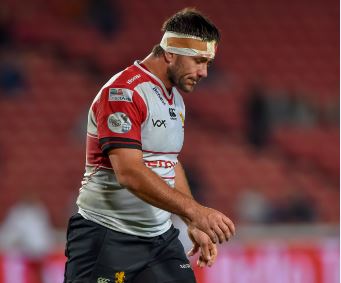 Golden Lions coach Swys de Bruin doesn’t believe his team can earn a reputation as a team with poor discipline overnight after coughing up a second red card in succession on Saturday.

After flank Kwagga Smith saw red in the Super Rugby final, hooker Robbie Coetzee was also shown a red in his team’s 47-31 defeat in their Currie Cup clash against the Sharks at Ellis Park on Saturday.

Coetzee also saw red in the Super Rugby match against the Kings just before the June break.

“We looked at the incident a few times in real time, but in line with Saru regulations I’d rather not say a word,” De Bruin said.

Coetzee was given his marching orders after he allegedly kicked Sharks flanker Jacques Vermeulen in the face with the Lions up 31-12.

From there it went pear-shaped for the Lions.

“There is no way Kwagga and Robbie’s red cards can be linked to discipline. I’ll protect both of them and stand and fall with them, Robbie tried to stop just short of the line,” he said.

“We really played phenomenal rugby to get to 31-12. It was some of the best rugby I’ve seen this team play in a long time.”

The Sharks surged to the top of the standings and coach Robert du Preez said he feared the worst for Coetzee when he first saw the red card incident.

“It looked bad on TV and Jacques had just scored the try and I thought this is not going to go down well,” said Du Preez.

With the Lions losing their third game in four starts they are now faced with a tough away clash against Western Province on Friday at Newlands.

“What happened with the system is that because we played in the Super rugby final it’s counting against us now, because we had to rest players,” said De Bruin.

“Until the red card I was happy with our attack. We put pressure on their lineout and made one error in the first half and it was five points and going into the shed 24-5 up I thought was a gallant effort.”