Backline coach Franco Smith is so excited about the 21-year-old Sharks winger that he already wants him closer to the action. 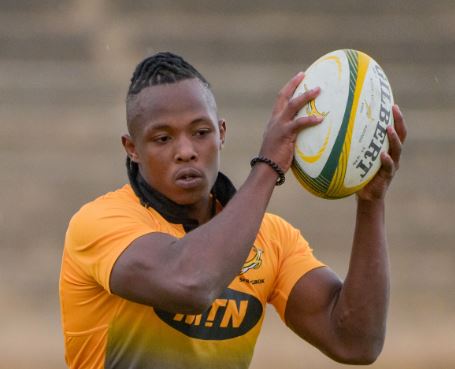 South Africa are in Bloemfontein for the Rugby Championship clash against Australia on Saturday and the addition of the exciting 21-year-old Sharks wing has been one of the talking points.

Also read: Springboks take a punt on their own ‘Lomu’: S’bu Nkosi

“He’s a lovely guy. Thank you for asking a question about him,” said Smith on Tuesday.

“There are a lot of players you (as coach) only get to know once they’re in camp. It was really nice to see him come in.”

Nkosi is one of the brightest new prospects to emerge in 2017 and his form has been so excellent that some believe is actually putting a lot of heat on current wing pair Courtnall Skosan and Raymond Rhule already.

However, he was one of three players sent back to their unions after Tuesday’s training session.

But Nkosi has left a mark.

“S’bu immediately contributed to the squad. He’s keen to learn and very coachable. He’s basically adopted the same attitude as ever other player. Eagerness to learn is a trade mark of this team for me. All the players coming into this environment are such a pleasure to work with,” said Smith.

“I immediately saw that S’bu is a very explosive player, I want to get him off his wing a little bit more. My belief is perception is we have to bring him closer to the action.”

The Springboks assistant coach, known for his attacking instincts, is indeed a great believer of space on attack being found in the middle of the field and not out on the wings.

“Having three centres and two fullbacks in a backline is my mindset. You want to get more rugby players out there who can get their hands on the ball as often as possible,” said Smith.

“I believe S’bu is one of the guys who has a lot of X-factor in general play and not just the finishing skills.”

“He’s getting the opportunity and Robert is giving him enough freedom. Hopefully we’ll soon see him more in the middle of field making breaks and getting his hands on the ball. It’s exciting to see him, there is some skill sets to work on still but I think he is a really good prospect.”