The national coach is rather scarily downbeat over his side's prospects against the All Blacks this week after this weekend's stalemate. 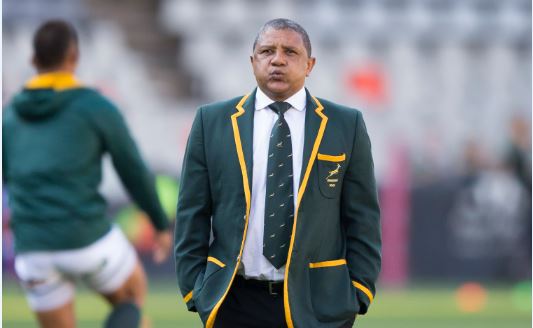 In an astonishing remark, Springboks coach Allister Coetzee has cautioned fans not to hold their breaths in this week’s final Rugby Championship clash against New Zealand in Cape Town.

Coetzee’s comment was followed at the weekend by a tweet from Bok defence coach Brendan Venter who told fans “if winning is all you see, stop watching”.

“We will prepare to win, but the reality is that people who believe the Springboks can beat the All Blacks in Cape Town, after just over three months together, are living in a fools paradise,” Coetzee said.

His remark followed Saturday’s high-octane six-try thriller, after South Africa were held to a 27-27 draw against Australia, with flyhalf Elton Jantjies pulling a difficult penalty just wide in the dying moments.

Though he admitted it was difficult to settle for a draw, Coetzee believed the Springboks had done well to bounce back from the record defeat to New Zealand two weeks earlier.

“I’m very proud of all the offloads we managed,” Coetzee said.

“It showed the character of the side to get off to a fresh start and there was no problem with the effort.”

The game was marred by a controversial incident when Aussie fullback Israel Folau pulled Bok wing Dillyn Leyds by his hair and was lucky to escape with just a penalty.

Afterwards Leyds insisted Folau had pulled him by the hair “not once, but twice”, while Wallaby coach Michael Cheika waved off the incident by claiming it was just a collar grab.

Springboks captain Eben Etzebeth would not comment on the issue, apart from what referee Ben O’Keeve had told him on the field.

“I don’t really want to comment on the hair-pulling incident, but I must say the referee was very upset with me running in,” he said.

No 8 Uzair Cassiem has been ruled out of the Bok team this week with a rib injury.