The Lions coach says it's too close to call as he defends his use of Malcolm Marx in the past weekend's Newlands playoff. 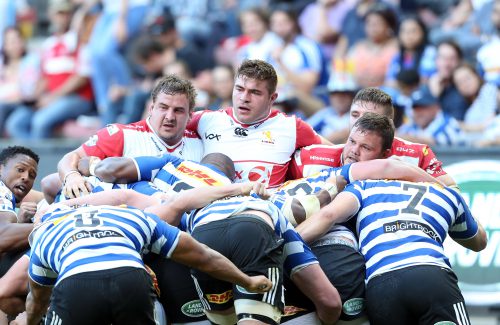 This weekend’s Currie Cup final between the Sharks and Western Province in Durban might be too close to call, according to Golden Lions coach Swys de Bruin.

The Lions’ campaign ended with a 19-5 loss to Province at Newlands on Saturday, while the Sharks beat the Blue Bulls 37-27 in Durban in the earlier semifinal.

“I’ve never been a gambling or betting man. It will be a good one but I really can’t call that one,” De Bruin said ahead of the trophy decider.

While the Lions could feel hard done by after the controversial try awarded to Province, when prop Wilco Louw was clearly involved in a double movement, De Bruin credited Province instead.

The hosts based their game on a sound forward display, while their ferocious defence rattled the Lions’ cage.

“We got beaten by a very hungry Province side who used their opportunities, while Robert (du Preez) converted the kicks that came his way,” De Bruin said.

“They played very well. Their defence was excellent and they did their homework well, but I must say in the same breath we didn’t convert very well.”

It was no big tactical ploy, De Bruin insisted, to move Springbok hooker Malcolm Marx and prop Ruan Dreyer to the bench prior to the game, sending them on seven minutes before half-time.

“Such decisions you must live and die by, but the whole week we tried to get Ruan going with a rib that wasn’t great and we had to inject him.

“So we were looking at him and Malcolm, who was something of a folk hero at the Boks, coming on a stage where the tempo would hopefully be a bit lower.”

De Bruin was pleased with his team’s campaign, despite falling at the penultimate hurdle.

“It’s two-fold. We wanted to blood the youngsters, but we play sport to win, so we are disappointed that we lost,” he said.