Desperate Springboks cling on for an ugly win in Paris

It's only South Africa's second away win under Allister Coetzee as a poor France side lets them off the hook. 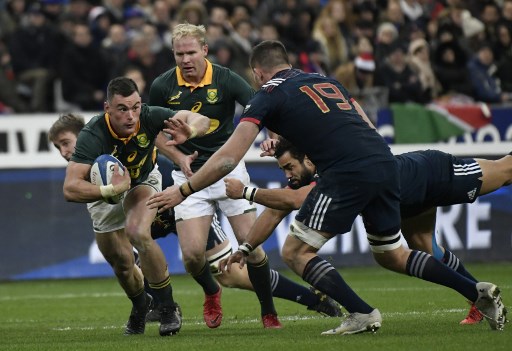 Spurred on by a hugely committed forward pack, the Springboks edged France by the narrowest of margins in winning 18-17 in Paris on Saturday night.

It was their first win in their last six Tests.

With hooker Malcolm Marx and captain Eben Etzebeth leading from the front, the Boks were much more physical and direct than last week against Ireland.

It was especially a strong performance at the breakdown and some robust defensive play – where Marx, No 8 Duane Vermeulen and flank Francois Louw stood out – that caught the eye.

With the Boks hanging on to a 11-10 lead, the crucial moment in the match came when centre Jesse Kriel scored South Africa’s second try in the 61stminute to take a vital 18-10 advantage.

However, it shouldn’t have  come down to that as flyhalf Handre Pollard had a shocker off the tee, missing four of his first five kicks at goal.

There was further drama with three minutes left when French replacement scrumhalf, Baptiste Serin, who earlier got a yellow card, scored a sniping try to bring his side within one point.

The Springboks had to desperately grind out in the nerve-wracking final few minutes.

Several Bok players played their hearts out like Marx, Etzebeth, Louw and Kriel but in the end the ‘award’ must go to the returning Vermeulen. He was at the forefront of the Boks’ physical approach and his ability to put pressure on the big French ball-carriers was a massive plus. He also showed good leadership when Etzebeth had to be taken off.