Coach Allister Coetzee raves over Francois Venter's performance against France in Paris and it certainly was a goody. 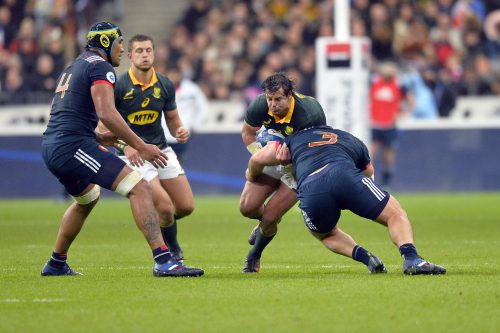 The Springboks are still struggling to keep their heads above water, but at least they have unearthed a worthy replacement at inside centre for Jan Serfontein in the form of Francois Venter.

While the jury is still out on No 13 Jesse Kriel, Bok coach Allister Coetzee said Venter was worth his weight in gold against France in Paris last weekend.

“In the northern hemisphere, with the linespeed and the soft going underfoot, you need your 10 and 12 to be really direct and Francois’ work-rate was unbelievable,” said Coetzee.

“Swys (Venter) wanted to get his hands on the ball every time the shape was broken down so he could generate that momentum.”

And while flyhalf Handre Pollard’s goal-kicking was dismal, his interplay with Venter was just what the Boks needed before facing Italy in Padova this weekend.

“I’m really pleased that he and Handre had a massive impact in dominating the gainline with ball in hand, so hopefully that will open up space for us for our big flankers,” he said.

“But I think we are still a bit lateral in the wider channels after good go-forward ball, so we need to run a bit harder.”

While the Boks have delayed a call on the shoulder injury of ace hooker Malcolm Marx until tomorrow, the only other change could be that of Pieter-Steph du Toit coming in for Siya Kolisi.

But despite a lack of game time, Coetzee hoped that Bongi Mbonambi and Chiliboy Ralepelle will be ready if they don’t want to take a gamble on Marx.

“Hopefully they stay focused and when the opportunity comes they will take it,” said Coetzee.

“But I have great belief in Bongi and he has realised how important it is to support Malcolm and to patiently wait for his chance.”

Coetzee said Marx’s great form made it almost impossible to substitute him.

“Malcolm is unbelievable as a hooker and his general play and his linework improved a great deal,” he said.

“It’s just unfortunate that players like Bongi and even Chiliboy have to sit on the bench and not get enough game time.”