Size would seem to matter in the dynamic Lions and Blitzboks star's case but it's seemingly becoming irrelevant weekly. 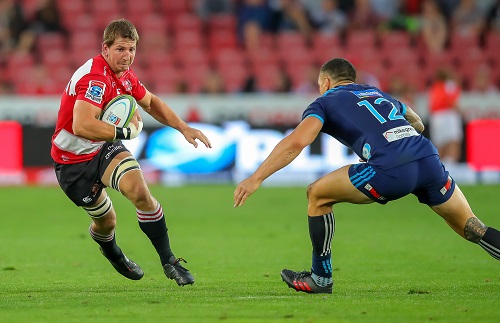 Much of that stems from the fact that many rugby folk perceive him to be too small to compete with so-called bigger players.

“It’s a challenge for me to prove them wrong. When I played for the Barbarians against New Zealand last year, I was particularly conscious of that goal,” said Smith on Tuesday.

“It was a huge opportunity for me to show the world and anybody else that it doesn’t matter how big you are, if you can play the game well you are good enough. I aim to maintain my own standards and get better every day.”

He’s already proven many doubters wrong, evidenced by various observers calling him unlucky not to get a Springbok cap at the end of last season.

Of more immediate concern for Smith is taking a harsh lessons learnt in last weekend’s unexpected Super Rugby defeat to the Blues to heart.

He believes it’s probably because the Lions ‘lacked a bit of focus’.

“Luckily it’s still early in the season. There’s time to make things up. Maybe it’s a good thing for us as team that it happened, to get back to earth and start working again.

“Every weekend there’s a different challenge, last weekend we slipped up with our cleaners on the ball and we made it easy for them and difficult for ourselves.”

Saturday’s meeting with the lowly Sunwolves at Ellis Park would seem to represent the ideal game for the Lions to get back on track but they’re not underestimating any team.

Smith is keen to improve further in 2018 despite the rapid progress he’s made already.

“I have my goals set for this year and next year. I’m working hard to get there. Fortunately I’m in a good system with good coaches, so it’s easier to perform.

“I want to wear a Springbok jersey this year.”

Captain Warren Whiteley’s month-long sidelining with a knee injury will test depth at flank but Smith is excited to see young Len Massyn coming in.

“I think it’s an huge opportunity for him. I rated him highly as a junior player.”