Hacjivah Dayimani has a licence to thrill at the Lions

The well-spoken eighthman has the same qualities as his regular captain Warren Whiteley but wants to learn from all his teammates. 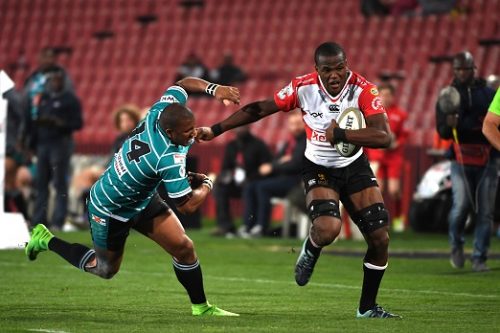 Boasting electrifying speed for a No 8, the Currie Cup presents an opportunity for the Lions’ Hacjivah Dayimani to break out of his mould.

After having to play second fiddle in Super Rugby, he says he’s now been given the full licence to express himself.

“I had guys with bigger names ahead of me like Warren Whiteley, Cyle Brink, Jaco Kriel that got injured, and Franco Mostert, so I was trying to show what I can do,” he said.

Clocking 10.68 in the 100m when he was at Jeppe High School, the 20-year-old said he saw the Currie Cup as an opportunity for him to improve.

“Coach (Ivan van Rooyen) said it’s a chance for me to show what I have, to showcase my talent because I know I can be better. Maybe 60% better.

“And it’s an advantage to have your conditioning coach also now as the head coach because in the past he worked a lot with us in the gym and off-the-field and all the time pushing us to greater heights,” he said.

Being named Man-of-the-Match after scoring two tries in last weekend’s game against Griquas, he said the Bulls at Loftus Versfeld on Saturday require their A-game and a team who you can’t even allow a sniff.

“I know a lot of guys from the Bulls and they are a tough side to play. They are strong up front and they maul well, so we will just try to outplay them out wide and find the spaces and weaknesses.

Dayimani, who is nicknamed “Achiever” as it rhymes with his first name, said the Currie Cup will be tough as they all want to show the Super Rugby coaches what they can do.

“So what I have to do is play chess and work out where the space is to find loopholes in the system and exploit that.

“Previously I tried to play a game which wasn’t mine. I tried to be physical, so I told myself I must stick to my strengths, go wide and take on the backs,” he said.

“I know it’s tough as everyone is expecting me to find the space out wide and score tries, which can put pressure on myself. So what I’m trying to do is to just block out these noises and just play my own game.”