But their form in the Currie Cup certainly has been compelling. 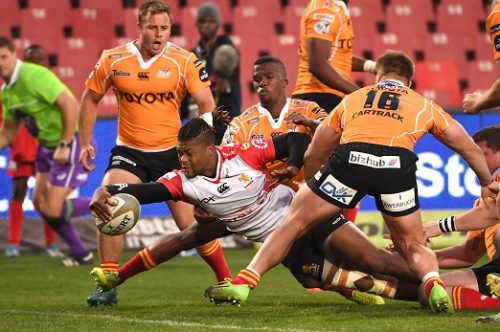 The Golden Lions are still a long way from firing on all cylinders, despite their emphatic unbeaten start to the Currie
Cup competition, coach Ivan ‘Cash’ van Rooyen has stressed.

The Lions were in sublime form at the weekend, handing the Free State Cheetahs a 47-14 defeat at Ellis Park, but Van Rooyen felt their second-half performance was simply not good enough.

“I was very happy with the first half, not so good in the second,” Van Rooyen said.

“We put a lot of emphasis the past week on starting well and we did that, but now it’s about starting both halves well.”

The Lions now face in-form Western Province in their next match.

Though the Lions climbed to the top of the table, Province had a bye at the weekend, while the Sharks were also among the front-runners and one of the three remaining unbeaten teams.

“Province are a good side and they appear to be hitting very good form, so it could be a cracker of a game,” Van Rooyen said.

After storming to a 33-0 halftime lead, the Lions saw the Cheetahs score two quick tries before hitting back with two late tries by centre Howard Mnisi and No 8 Hacjivah Dayimani.

“When the system doesn’t work like it should, I think it comes down to being sluggish or not, especially in the Currie Cup, with turnovers where teams will punish you,” Van Rooyen said.

“The Cheetahs came out well in the second half, and they definitely improved, but we made one or two bad decisions and committed errors in our own territory.”

The star of the show was flyhalf Shaun Reynolds who scored two tries and helped himself to 22 points, while the experienced Mnisi was one of the team’s standout players.

“Shaun played well but he has been playing well for a while and it’s nice for him to take that opportunity,” Van Rooyen said.

Cheetahs coach Daan Human admitted they were battling after losing their fourth straight game but said it was a challenging scenario to have two teams competing in different competitions.